The Putnam County Legislature Wednesday night (May 1) asked County Executive MaryEllen Odell for $150,000 in funds to keep the PARC Preschool for autistic children open through the first half of the 2013-14 academic year. 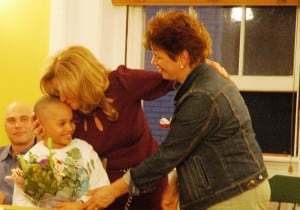 Putnam County Executive MaryEllen Odell, center, thanks PARC Preschool supporters after they presented her with flowers in her appreciation of her assistance. Photo by L.S. Armstrong

Odell responded that on her part “there’s a commitment” to supply the funds and take other steps to ensure continuation of the Mahopac-based, privately run but state-supported school, beset by inadequate New York state reimbursements for educational services and similar fiscal constraints.

After talks with PARC, the Legislature voted unanimously to urge Odell to supply the $150,000 in county funds to assist the school through the fall and, in 2014 budget-setting, ask that Dutchess and Westchester counties, “which also benefit fr0m the preschool program in PARC, join with us” to fund the remainder of the next school year.

In March, the school announced its intention to close in August because of funding shortfalls. The news created consternation among school supporters, including parents from Philipstown, who rely on PARC to help their children. The school enrolls 53 youngsters, aged 3 to 5, and employs 47 full- and part-time staff members. Anguish over the expected closing came at the same time that New York’s draft budget proposed a 6 percent cut in the state Office for People with Developmental Disabilities (OPWDD), prompting a wider outcry over diminished support for those with special needs. That cut was later reduced to 4.5 percent. PARC, the Putnam branch of the New York State Association for Retarded Children Inc., runs programs beyond the preschool, and its officials participated in the fight against the 6 percent cut as well.

Wednesday’s unanimous county Legislature vote to give PARC $150,000 came with strong endorsements from individual legislators, who cited a need to intervene early to assist disabled children to avoid difficulties later as the children grow up and attempt to continue their educations or adjust to society. They also said that the outlay for the school is balanced by the expense of sending the children elsewhere, with the toll of long bus rides and transportation costs factored into the financial equation.

“If we did not have the program in Putnam County, we’d be spending the same amount of money, if not more,” said Deputy Legislature Chairman Anthony DiCarlo. Looking ahead, beyond the PARC allocation, he called for restoration of the OPWDD money at the state level as well. “We want to see all that 6 percent restored, for all people with disabilities,” he said.

Legislator Barbara Scuccimarra, who represents Philipstown, backed the assistance to the school but cautioned her fellow legislators to look at the bigger picture. “I worry that there are other organizations out there that will be in the same circumstances as PARC,” she said. “And what do we do then — say, ‘No, we can’t do it, we don’t have any more funds’? We have to get to the root of the problem — and hope the state comes through.”

Legislator Sam Oliverio of Putnam Valley, who led the effort to aid the school, said the $150,000 could be drawn from a county sales tax surplus and reimbursed by the state, if it adjusts its support levels. Meanwhile, the emergency aid “is a stop gap” to buy time, he said.

After the meeting, Odell said that “I consider the $150,000 a good gesture.” Along with a commitment for that amount, “there’s a partnership with them (PARC)” to find adequate resources, she said. “This is an opportunity to collaborate and not just write a check. We’re going to be a model for all the nonprofits” and governments “because this is not just about PARC. We’re going to make sure this resonates.”

PARC supporters expressed gratitude to both the legislators and Odell, presenting the latter with a bouquet of flowers.