After hearing all three candidates speak about running for two seats on the Garrison School Board of Education, a parent in the audience at the PTA’s Meet the Candidates Night remarked that all three seemed to have many similarities. 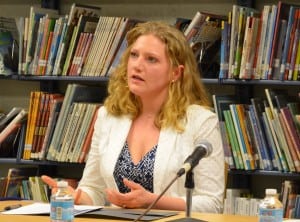 All of them have two or more young children attending or about to attend the school. All have similar goals for improving education at the school — especially in terms of incorporating technology effectively and using the school’s unique resources (such as the school forest) more fully. And all of them have been active at the school: Derek DuBois co-chaired MAD Science Week and participated in the board’s goals workshops earlier this school year; Charlotte Rowe has worked to create a journalism elective and led the Parents as Reading Partners (PARP) program for the last two years; and Julia Wynn has been active on the PTA this school year.

The parent then asked what differentiates each of them as a candidate for the School Board.

DuBois responded that his professional background sets him apart from the others. Trained as a medical doctor, he has worked as a management consultant and partner at McKinsey and Company for the past nine years, which has given him experience working with boards of directors and senior leadership of various institutions to improve the cost and quality of health care in the U.S. and drive positive change and performance in those organizations. 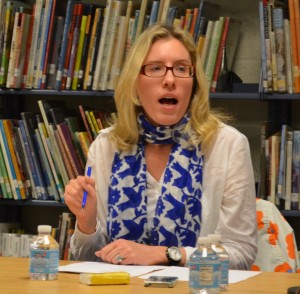 Rowe, who is finishing one three-year term on the board, said she has advantages as the incumbent. Throughout her campaign for re-election, she has emphasized her role in gathering feedback from the community — from parents as well as people who do not have children at the school — and relaying their concerns to the administration and the board. Her background in journalism, she said, allows her to do so in a reportorial way, keeping comments anonymous and constructive.

As an example, she cited issues that parents had with the kindergarten orientation one year, when she canvassed the parents who had attended and gathered information on what they had wanted to see in the school’s presentation. The following year, the kindergarten orientation included those elements, which Rowe said demonstrates that solutions can be created through compiling the community’s input.

Wynn, the most recent arrival to the district, stressed her priorities and interests — technology, language and environmental education, all of which she said will prepare students to compete in the global economy as well as to become stewards of their communities. She is particularly interested in helping to secure grants or other monies to expand the Spanish language program to start in kindergarten and to offer computer coding courses. 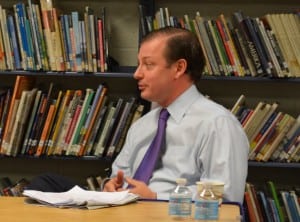 Other differences could be seen in the candidates’ emphases in responses to the PTA’s prepared questions and those from the audience. DuBois, for instance, was asked specifically about a group to which he belonged, the Friends of Garrison School, and whether it had a specific agenda that he would pursue as a board member. DuBois answered that the group was more loosely knit than that and explained that a handful of parents had gotten together last year to share ideas about improving the school, which they presented at a board workshop to revise its goals and objectives. During that process, an email list was created, with other parents asking to be added.

Out of their efforts, the administration recently created a task force to visit schools and gather information on successful programs that could be of interest to Garrison School.

Responding to the question of what attributes are essential for board members, the candidates stressed a few different areas. Both Rowe and Wynn emphasized listening to parents and community members. Rowe added that building consensus is how a board functions most healthily. Wynn noted the need for patience but also for “dogged persistence.” DuBois cited a directive from a fellow parent to “be kind, be realistic, be bold.” He added that the role of the board is to facilitate the work of the faculty by supporting and empowering them.

PTA President Angela Smith, who moderated the forum, asked whether they believed there is a general parent vision for the school and how each candidate’s vision differed from that view. Wynn said she believed there were two mindsets at the school — that no changes need to be made or that the school needs to step up its game — and that she falls somewhere in between. Her view is that the school should preserve its uniqueness but also work to prepare students to compete in the future. 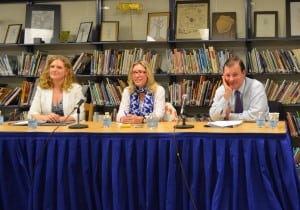 DuBois said he could not presume to speak for all parents, but from his involvement in the goals process, he felt that the current board did well in seeking community input and came up with revised goals that reflect the overall vision of parents. Because many parents see a gap in reaching those goals, DuBois said, he hopes to continue seeking input, especially from teachers, with whom he’d like to speak one-to-one to find out what they feel are challenges in reaching those goals.

Rowe said she believed there were probably 200 different visions for the school, but she has noticed two different threads — that the school needs stronger protocols for responding to all learners’ needs and, secondly, that it should take advantage of its unique setting along the river and near its forest.

To find out more about the candidates, read Philipstown.info’s interview of them online, which includes links to Wynn’s and Rowe’s websites and to DuBois’ full statement.