This year, Betsy Rasa is more or less feeling ready. She thought about retiring a year ago, when her longtime (24 years together and “such a great assistant”) aide, Peggy Carano, did the same, but it just didn’t feel right. Her husband, already retired and eager for a traveling companion to Italy and beyond, wanted her to. Then there are all those books she’s looking forward to reading, but teaching, when it’s as much of an avocation as it has been for Rasa, is a hard habit to break, so she returned for “just one more year.” 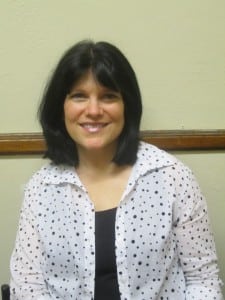 Betsy Rasa will retire from Haldane in June.  Photo by A. Rooney

With the year now over, in just a few weeks she will be closing the door on her classroom, walking down the hallway out onto the blacktop, bidding a fond goodbye to Haldane, a place she arrived at, after almost not finding it, well over three decades ago.

Back then, after four years teaching in Chappaqua, Rasa was mulling over a job offer in Edgemont, when she spotted an ad in the paper for an opening in Cold Spring, but she didn’t know where Cold Spring was. Acquiring directions, she drove up but got a little lost. A man noticed her confusion and told her he was walking up to the school and would take her up. Arriving by foot, seeing the just-built “new wing,” her first reaction was, “This is perfect.”

She interviewed with the superintendent, who offered her the job on the spot and told her to call him with an answer when she got home. “I had never heard of the school,” she recalled, “and I nearly couldn’t find it … but it turned out to be just the ideal spot for me. It has gone by so fast.”

During her time at Haldane, the school has gone through 10 principals, she has taught the children of children she originally taught and has had children she taught come back to the school as teachers. She’s also gone through an avalanche of curriculum change, though she’s quick to note that “it’s cyclical; it’s always a wait-and-see as to what will come of it and what will go. Here at Haldane, everything new that comes along, we’ve already done.”

When Rasa began teaching, Haldane Elementary was done in a “team teaching,” open-classroom style. The metal walls that now separate some of the classrooms were not erected, and first and second grade were taught together. (Rasa began as a second-grade teacher.) She team-taught with Nancy Radtke for several years.

Offered a choice to switch to either kindergarten or fifth grade, there was no hesitation for Rasa, who had always felt the draw of the younger students. Hard as it is to fathom, much of Rasa’s earliest efforts were devoted to convincing parents and the community of the merits of full-day kindergarten. At that time, there were only three such programs in Westchester, and Haldane’s was the first introduced to Putnam County.

“It used to be half-day, and we had a very progressive principal, Joanne Marien, who saw that full-day was important. We had a parent meeting, and realized we had to develop a model. I sat down with [fellow teachers] Fran Dawson and Carol Kiefer, and the three of us made it from scratch. We really were proud of it. We had more money in those days to visit and watch, and we did. Jean Marzollo also worked with us a lot; she was an editor at Scholastic then. We wound up having many schools come in to see our program at work.”

Through all the years and incarnations of kindergarten, Rasa has held fast to one critical component: the social and emotional development of children. “With all the pressure to turn kindergarten into first grade, you don’t ever want to give up the kindergarten experience; you go to other schools, and there are no sand tables or pretend houses. I think you can combine the social piece and the Common Core. We don’t want it to become first grade — we want to maintain the integrity of what we built this program on.”

Rasa said that she is frequently asked, “Have the kids changed over the years?” Her answer is an emphatic “No.” She explained: “A 5-year-old developmentally is still a 5-year-old. Curriculum changes worry me because 5 is 5. And as tech savvy as these kids are, what they are beyond that is wonderfully curious about everything. Parenting styles are different — you can have 20 students with 20 different parenting styles. When I started, the teacher was always right; you listen to your teacher. Now we have to work more with parents to develop better behavior patterns. Everyone wants their child to come to school and learn, but they have to respect that behavior is a part of it. Also not everyone comes in at the same level of the playing field. My one frustration is that not every student goes to pre-K. But by the end of the school year we always get them where we want them to be.”

Of the vastly increased pressure of standardized testing, Rasa acknowledges that “standards are good, but now we are seeing standardized testing reaching down to K through 2, and the problem is we already had our own assessments. They are meaningful, and we don’t want to give them up. Also it can make some teachers teach ‘for the test’ because it is tied in with teacher evaluations — I worry about that. What it doesn’t take into account is that we have taken so many special needs kids that in another district would be taken out of district. So many have stayed on and wound up in regular classrooms. We’re very involved in pre-K scouting and development. These kids have been given a chance to come to a regular school, and that’s what I’m proudest of. We should be proud of our district that we can accomplish that — it’s a unique little place. Plus, we have a great staff, great parents who always, always volunteer to come on trips and volunteer — that’s what makes our school so great.”

Other unique district aspects that Rasa considers advantageous include the K-12 campus. “New parents come in worried and ask, ‘Will there ever be a time when my child will be with the high school kids?’ What they don’t see right away is that those high school kids are the ones helping me by putting on a shoe, taking a child to the nurse, and have never been disrespectful. I’ve never had an incident here, and it’s also so special to have the high school students come into the classroom again as teaching assistants.”

For those, including former students, who feel the calling to teach, despite what Rasa sees as a changed and more difficult profession, she would still recommend it highly. “It’s very different, and it will take time and patience to get through this time of great change, but still basically you are educating children. It’s a really hard job. You work so much harder than people see. I’m on the phone with parents almost every night. You have to feel it if you want to be a teacher. You’re ‘on’ from the minute you get here; you have to be at your best. But if you have a calling to work with children and make a difference, you just have that calling. And then have a student who comes back and remembers you — there’s nothing better.”

(This reporter admits to a slight editorial bias, having achieved the trifecta of having Mrs. Rasa teach each of her three children).