The prospect of sitting indoors for an entire day listening to people talk might not appeal to those itching to start their summer weekend. As it turned out, the weather report of unending rain for last Friday was surprisingly accurate, and the Hudson Valley was sufficiently waterlogged by late morning. At Beacon’s Center for Environmental Innovation and Education (CEIE), however, the mood was sunny and blue-sky contagious. 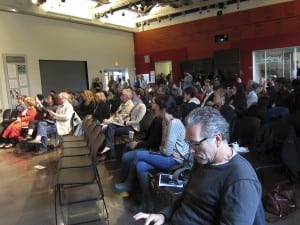 The 19th-century industrial building nestled in Denning’s Point State Park is a green-design renovation owned by the Beacon Institute for Rivers and Estuaries and is a perfect example of the city’s revitalization. It was also the ideal venue for Beacon’s first-ever TEDxLongDock, a one-day conference for some of the region’s most creative and ambitious thinkers.

TEDx, a division of the well-known TED conference, offers individuals or groups guidelines for organizing local, independent TED-like events in their own communities. Organized by BEAHIVE + Antidote Collective’s Scott Tillitt, with a local team that included John Rooney, Matthew Perks and Rob Penner, the stated goal of their event was to “inspire our thinking, channel our ambition and help unleash the potential of our bold new creativity.”

It’s not easy being the first speaker in a long, impressive lineup, but Jennifer Schwartz Berky, an urban planner and founder of Hone Strategic Development Advisors in Kingston, did an excellent job of setting the stage for the rest of the day with a presentation on community-driven development in the Hudson Valley.

The concept of community was popular with speakers, along with collaboration and sustainability. Catchphrases like “social capital,” “place-making” and “civic protagonism” were duly noted by attendees. Not surprisingly, author and activist Jane Jacobs was conjured more than once, as was Eckhart Tolle (The Power of Now).

The only last-minute replacement in a roster that included 16 speakers was Doug Motel, an author and performer from Rosendale. Motel based his humorous monologue on Ram Dass’s seminal book Be Here Now to draw a connection between presence of mind and creativity.

Author and designer Karen Salmansohn’s presentation suggested ideas that every corporate manager should pay attention to, including “presenteeism” and “epeephanies,” to show that a little more fun in the office is the antidote for an overworked, stressed and thereby unproductive staff.

Woodstock resident Sarah Jacob shared her love of tango as a soulful example of the art of partnership. Shawn Dell Joyce, founder and executive director of the Wallkill River School, detailed how her nonprofit organization has been working with local artists and farmers to successfully boost tourism in Orange County. 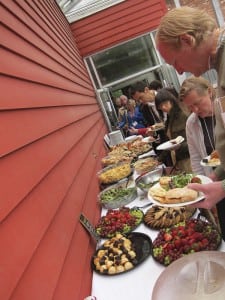 The biggest round of applause went to Joe Concra, co-founder and executive director of the O+ Festival in Kingston, where artists barter their contributions directly for medical and dental services from art-loving health care providers. After three years as a local grassroots event, O+ has gained national attention and will launch in San Francisco in 2013.

Runner-up for audience enthusiasm was John Capello, a partner at the Walden-based law firm of Jacobowitz & Gubits, who advised the audience how to get past legal barriers to build creative, diverse and sustainable communities. His answer to citizens who might have a problem with more green space instead of more parking spaces was, “Deal with it. Walk a little more.”

William Etundi Jr., founder and CEO of See.Me, presented the notion of social justice activism as celebration, based on his work building a social network of hundreds of thousands of artists to produce immersive community events.

The Hudson Valley’s contingent of food activists was represented by whole foods chef and nutritional counselor Margot Schulman, founder of Fareground Community Kitchen, and Marcus Guiliano, chef of Aroma Thyme Kitchen, the first Certified Green Restaurant in upstate New York. Tony Falco, owner of The Falcon in Marlborough, stressed the importance of supporting living artists and live performances as integral to the health of developing communities. 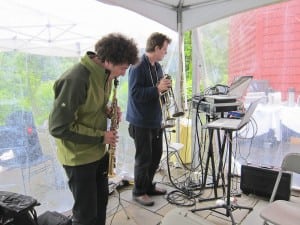 TEDxLongDock presentations will be available on the official TEDx Youtube Channel within the next few weeks. For more information, visit tedxlongdock.com or beahivebzzz.com.