Missing the kind of bagels he wanted to eat, owner Art Burns took matters into his own hands

From 2009 onward, the accusation from former denizens of New York City, “You can’t get a decent bagel here,” lost the ring of truth when Beacon Bagels opened for business, serving up bagels that can hold their own outside the Big Apple. It figures that co-owner (along with his wife Anik) Art Burns earned his stripes in youth working for a spell in city bagel shops, storing away the tricks of the trade for later use in life. One thing he knew immediately was that the water (a crucial factor in baking bagels) in Beacon would be perfect for bagel-making, because it is sourced and not highly treated.

Burns did not spend his working life solely surrounded by bagels. He and his wife moved to Beacon in 2006 and were commuting daily to jobs in advertising in the city when the combination of the recession, the birth of their first child and a yen “for a wonderful bagel” swirled together to make their “someday dream” of opening a bagel store turn into a “today” endeavor, as they “broke open the piggy bank to make it happen.” 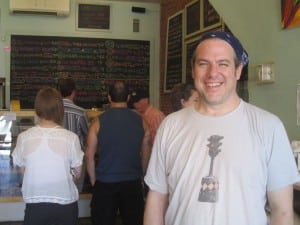 A steady stream of customers lines up behind Beacon Bagel’s Art Burns.

Burns said they would “never return to our previous existence — this is much, much better.” Now with two children, he said: “Even though it is hectic, we have integrated this into our lives. We used to have to travel for work, but now we can spell each other and run out and spend a few hours with the kids; we turned the whole thing upside down, all for the good.”

Now approaching its fourth birthday, Beacon Bagels has experienced the “steep uphill growth curve” of Beacon itself, serving up to 1,200 bagels on weekends and about half that on a typical weekday. Originally the intention was to stick solely to bagels, with bins and a “by the bag” feel, but input from the community has led to a much more far-ranging menu, with many creative (and creatively named) hot and cold sandwiches and breakfast options. (They are open for breakfast and lunch only and close by mid-afternoon.) There is a full range of espresso drinks.

It took the Burns duo about six months to go from the notion of opening the business to actually opening the doors. Their intention was to find a storefront in which they could create something unique from scratch, specifically not wanting to open up in a place that had formerly held a food business. They desired a comfortable atmosphere, one the community would be drawn to.

Listening to the wants of their customers, they soon added more hot items, especially egg sandwiches (their current takeout menu lists 17 variations on the theme), and continue today to keep things fresh. Lately they’ve “rolled out pretzels and bagel braids.” Each year, new faces become regulars, and among their clientele there are many who have turned up several times a week during all four years.

Artwork adorns the walls of the store. Burns is particularly proud of Beacon Bagels’ three-time participation in Beacon Art Adventures’ animal shelter fundraiser, where children are given pictures of animals in shelters and asked to paint them in an environment in which they’d like to see them adopted. The store showcases the works, which are then sold, with profits (recently amounting to nearly $2,000) going to the Animal Rescue Foundation and Mid Hudson Animal Aid shelters.

As for what makes a good bagel, Burns said: “Texture, the ingredients and caring for what you do. I’ve had people come in, experienced bakers, but they didn’t care and it showed; now I have some inexperienced people and they care and the results are great.”

The bagels, made from a mixture of dry ingredients including unbleached, unbromated flour, salt, sugar and yeast, are made at least one day — and sometimes up to three days — in advance, “so that the flavor sets,” said Burns.

There’s a lot more to choose from than just bagels at Beacon Bagels.

“It’s a pretty basic concept. Bad bagels come about because many stores don’t go to the trouble of boiling them first — that’s key, because the water then soaks into the dough; then placing it into 500-degree heat, that creates that nice crust. If the whole thing is gooey and stretchy, it’s a sign that they’re skipping the boiling and mailing them in. It’s a lot cheaper to do it that way.”

Beacon Bagels also serves local milk, locally smoked and nitrate-free fish, and they roast their own turkey and grass-fed beef.

For some Beacon Bagel statistics, 8 a.m. — “like clockwork,” said Burns — is the store’s busiest time of day; they open at 7. Weekends, though, are “never not busy.”

The most popular variety of bagel is whole wheat, “maybe because we use local honey,” he added. All of the bagels, with the exception of the egg variety, are vegan. They do catering, including many post-wedding breakfast events, and recently created pink bagels as a birthday party request from a little girl. Opening up other locations is “in the back of my mind,” Burns said, but there are no specific plans formed at the moment.

Beacon Bagels is located at 466 Main St. in Beacon, and the phone number is 845-440-6958. For more information visit thebeaconbagel.com or their Facebook page.