Bands will perform at Dockside Park on Cold Spring’s riverfront

Exit Through the Gift Shop is a student-based, progressive-rock jam band with Ben Langer on keyboards, Patrick Daponte on the drums, James Rubino on lead guitar, Collin Harrington on bass guitar and Kady Neill on vocals.

Gillian’s Island is made up of Susan English, Roberto Muller and Margaret Vetare — three lovers of sweet and rich vocal harmony. Their repertoire includes early country music, folk, a touch of bluegrass and the works of more contemporary songwriters. Acoustic guitars, banjo and upright bass are integral to their warm, traditional sound. Their playlist spans more than 150 years, from Stephen Foster to Merle Haggard to Gillian Welch. 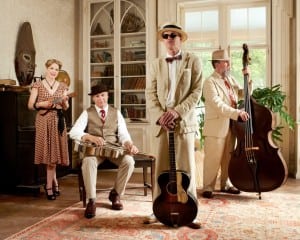 Tiki Daddy personifies the undeniably seductive Hawaiian-inspired music of the 1920s and ’30s, combining the swinging acoustic archtop sound of the Tricone steel guitar, ukulele and bass. Tracing the influence of the early adopters of slide guitar into jazz, country and blues music, Tiki Daddy is made up of John Harms, Al Hemberger, Art Labriola and Stacy Labriola. Collectively, they are obsessed with a period of time when musical categories were not strictly defined and cobblers of tunes ruled the day. 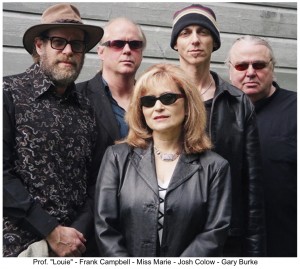 This Grammy-nominated group from Woodstock was formed by Aaron Louis Hurwitz (aka Professor Louie) for his co-productions with the Rock ‘n’ Roll Hall of Fame group The Band, and they were the studio band for CDs by Rick Danko, Garth Hudson and Levon Helm. They have recorded and performed with many acclaimed musicians and are alumni of The Band, Joe Jackson, Van Morrison, Bob Dylan, Steve Forbert and Shania Twain. The Village Voice said of Professor Louie, “(Their) upstate ensemble is an old-school Americana template that jams out timeless rock, country, blues and New Orleans-influenced originals.” Their CD Whispering Pines received five Grammy nominations in 2010. Professor Louie & the Crowmatix play more than 150 shows a year in the U.S. and internationally.