Each and every week, for decades on end, up to 24 people have headed off to play volleyball at the drop-in Thursday night sessions led by Gloria McVey and her husband, Dan, since 1986. Back then the games were held at Haldane’s gym and were frequently canceled by special events and awards nights held at the school. Now a Thursday night fixture at Philipstown Recreation Center, the sessions take place year-round, and when a holiday intrudes, the games are shifted to another night for that week, because “people are addicted to them and don’t want to lose a week,” said Gloria McVey. 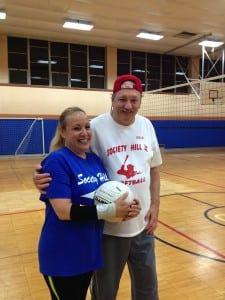 Back in the mid-1980s, McVey was one of those classic Philipstown sports moms, coaching Little Sluggers, then Little League (the majors and the minors, she noted) and adult softball as well, while raising her two sons. A friend from Little League suggested volleyball, and that was that. After she stopped working, McVey had the time to really pull the program together. “I needed a night out,” she recalled, “so my parents watched the boys.”

Then, as now, the program was open to all, on a drop-in basis for a nominal fee, which has actually dropped in recent years from $5 per night to a mere $3. (Recreation programs such as this one need to be self-sustaining.) In earlier years there were two nights of volleyball a week, on Wednesdays and Fridays, with Wednesday reserved for more intense matches, while Friday was more social.

Now it’s a bit of both, with no set teams, and mixed and matched co-ed players on both sides. Depending on the number of players who turn up — McVey said it ranges from eight or 10 to a high of 24 — there are usually two nets set up. Players range in age from around 18 through 60-plus, and players from any level are accepted.

“It’s competitive enough to be good, but anyone can try,” said McVey.

People come and go, get busy, move away, and the popularity is likewise cyclical, but there’s a pull to it that regularly draws many who have moved away back to visit or are home for the holidays and stop by on a Thursday to serve and volley again. McVey described it as “a constant, but with blasts from the past; people can’t get it out of their systems.”

Many current players come from outside of Philipstown; there are regulars from Wappingers, Beacon, Croton, Lake Carmel and even a firefighter who travels up regularly from Queens. There are many family configurations playing the game, with a mother-daughter pair, sisters and brothers, and just an overall congenial, friendly atmosphere, McVey said. She added that they all get together for a Mayor’s Park party once a year, socializing beyond the game. Two couples have even met and married through Thursday night volleyball! 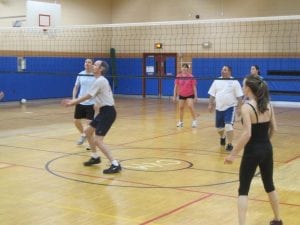 Melissa Angier of Cold Spring, a regular for many years, called volleyball at the Rec “one of the best parts of my week: great stress relief! Aside from fitness benefits, we have a lot of fun. Our games can be silly or very competitive, depending on the mood and who shows up. Over the years I have gotten to know people I wouldn’t have had an opportunity to otherwise, and I find that is important to the quality of my life here in this small town. We get people from all walks of life. It’s a little bit like the TV show Cheers; if you spend a night of each week with the same people over the years, you really care about them. Plus, I simply love playing volleyball.”

John Maasik, who doubles as a volleyball regular and the chair of the Philipstown Recreation Department commission, gave credit to Gloria and Dan McVey for creating a popular program with such longevity. “Rec programs need motivated, responsible volunteers who can be counted on week after week. I can’t remember a time the past few years outside of holidays that Gloria and/or Dan weren’t there to open the doors and set up the nets. They are always the first to get there and the last to leave, for the past 27 or so years. Gloria is committed to making the program succeed, and she and Dan have done a fantastic job over the years. I’ve been amazed by their efforts and Gloria’s ability to bring together people from all backgrounds and ability levels. Everyone is welcomed with open arms, and all are invited to join in on the fun (and competition). She and Dan are truly assets to the Rec program and our Philipstown community.

“Gloria keeps the program open to all ability levels and tries to organize the teams into competitive groups. She and Dan send weekly reminders and help plan outings outside of volleyball — including picnics, birthday parties, going-away parties, etc. — that help build the camaraderie. Although some players may come and go due to other life circumstances, it is their commitment to the program (and having fun) that keeps the spirit and popularity going. Plus Dan likes to play his mix tapes/CDs in the background, and that adds to the festive atmosphere in the gym.”

As for novices or those who remember great spiking skills from distant memory but aren’t sure if they’ve retained them, Gloria McVey said that it’s a “very accepting and diverse group, and people are encouraged. When they come often and play more, they improve.” That being said, they keep the nets up quite high, and there are “some intense players — they really can spike and hit a jump, but others can’t play that well but keep coming and get better. Most of the time it’s a matter of them getting mad at themselves. The teams know who to compensate for.” 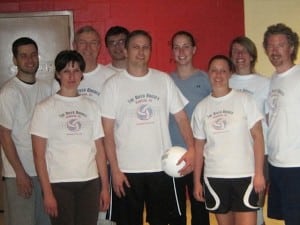 Rec competitors who entered a regional tournament at the Westchester County Center in White Plains and have gone on to play in several tournaments together.

Maasik, who played volleyball competitively in high school and recreationally ever since, said: “It was great to discover this local co-ed program through Philipstown Recreation. It has brought people that have settled in Philipstown from all over the country to play a sport that they enjoyed either competitively or recreationally in the past. On any given week, players may include a former California high school state champion, collegiate volleyball players, students back from college, teachers, coaches, engineers or first-time players. … It’s great to have a fun but competitive environment so close to home to get exercise. I’ve made some lifetime friendships through the program, and many of us have gone on to join competitive volleyball tournaments as well as played together on softball teams that Gloria and her husband Dan also manage. I know several Philipstown residents who plan their week around Thursday night volleyball!”