Last week’s news outlets reported on a plan in Hastings-on-Hudson to collaborate with Tufts University Center for Animals and Public Policy to control the deer population with birth control. Although still in the planning and funding stages, it’s been labeled as a kinder approach to herd management and a compromise for townspeople who feel that hunting and culling are cruel methods of control. 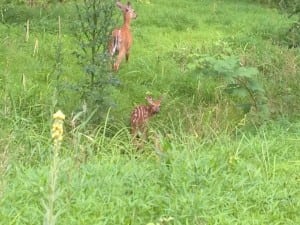 Tufts researchers reported that birth control successfully decreased the deer population on Fire Island by 50 percent over a five-year span. There are skeptics of the plan since it’s only been tested in locations where the population is closed and new deer don’t move in. Nothing is stopping the deer in Hastings-on-Hudson from crossing town lines or other does that haven’t been given birth control from moving in. The deer have to be captured and injected, as well, which can cause stress and trauma that may kill them regardless.

It doesn’t sound like a statewide birth control program for deer is in the works anytime soon, though. A spokesperson from the Department of Environmental Conservation, Region 3, Wendy Rosenbach, said, “Hunting is our statewide management technique for the deer population, currently. We do consider other options, though, and we welcome public input and comments.”

To determine whether or not hunting is adequately controlling or stabilizing the deer population in our area, all you have to do is look at the forest understory, or lack thereof, to form an opinion. Deer have overgrazed our woods to the extent that most native understory plants can’t be found any longer and have been replaced by invasive species that deer don’t eat, like Japanese barberry.

As a gardener, it’s particularly frustrating to constantly be fending off “bambi.” Every “deer-resistant” plant in my yard has been nibbled or eaten to the ground, especially this year. Usually I get cleaned out in the fall and don’t mind it very much since everything is done blooming, but I’ve had daily browsing damage from deer. They even started eating the forsythia, which I thought wasn’t on their menu. It could be I’ve provided a better banquet that’s attracted them or there are just more deer looking for a meal.

According to research from Cornell University, I learned in a presentation last fall, the only really effective method of keeping deer away from plants is a barrier, or fencing for non-scientists. Six to eight foot fences, depending on the size of the space being enclosed, are the most effective way to safeguard vegetables or high-value plantings.

It was a no-brainer to fence the garden, but I’ve held off on fencing the flower beds and shrubs. It just doesn’t have the same impact. I’ve been careful about trying to choose plants that weren’t appetizing to deer, but ultimately, it doesn’t matter. If they’re hungry enough, they will eat just about anything in the yard.

Foul-smelling sprays work to a point, but rotten eggs need to be the key ingredient. Rotating the brand may make the sprays more effective and be diligent with this method. Coyote urine, human urine, human hair? In research tests, none of these have been shown to detract deer. Talking to any group of Hudson Valley residents, though, there are strong opinions about deer and I know there are many other methods that haven’t held up to science, but people believe work. More power to you if you’ve had success.

The economic cost of our overpopulation of deer is very high. Car accidents, environmental damage, and tick diseases are at the top of the list of damages and it doesn’t seem as  if a solution is close at hand if we could all just develop a taste for venison. It’s exciting to hear that Hastings-on-Hudson is pursuing alternative options and maybe their success can lead to a broader effort. For now, maybe we should initiate a Philipstown promotional effort to attract deer hunters this fall?