More than 200 canoeists will paddle into Cold Spring Sunday, Aug. 4, part of a journey that will see them travel 140 miles down the Hudson River from Albany to New York City. The excursion is being held to mark the 400th anniversary of the signing of the first treaty between the first European settlers, the Dutch, and the Haudenosaunee, part of the Iroquois Confederacy. The agreement formed the basis of all later treaties with the English and the United States. 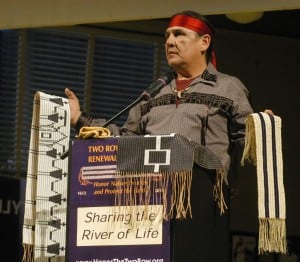 Jake Edwards of the Onondaga Nation Council of Chiefs holding the Canandaigua Treaty Belt and the Two Row Wampum Belt.

The 13-day paddle, part of the year-long Two Row Wampum Campaign, will feature Native American Indians and non-natives, canoeing side-by-side in two rows. The paddle will honor and bring to life the imagery of the Two Row Wampum, the beaded record of the historic treaty.

A festival, open to the public, will be held from noon to 8 p.m. Saturday, Aug. 3, at Riverfront Park in Beacon. Paddlers will arrive in Cold Spring Sunday, Aug. 4, and most participants will camp at Dockside Park. Their stay will include educational presentations at 4 p.m. on Cold Spring’s riverfront. Speakers will include Onondaga clan-mother, poet and educator Wendy Gonyea, Two Row Wampum education coordinator and professor of environmental studies at SUNY College of Environmental Science and Forestry, Jack Manno, and Two Row Wampum organizer Lena Duby.

The group will leave Cold Spring at approximately 10:30 a.m. Aug. 5, and continue their paddling journey downstream to Stony Point.

Organizers are looking for local residents who can provide lodging for an elder on the night of their stay in Cold Spring or shower facilities for other participants. Contact Myra Long at [email protected] or Rosemarie Gratz, (Putnam Valley resident and campaign volunteer) at [email protected] for details. Donations are also welcome.

The flotilla will arrive at Pier 96 in New York City the morning of Aug. 9, the last day of the paddle. From there, participants will walk en masse to the United Nations in honor of the International Day of the World’s Indigenous Peoples. The Dutch Consul General, other non-native dignitaries and representatives of native nations will greet the group.

A full itinerary for the paddle and events to be held along the way is available at honorthetworow.org.