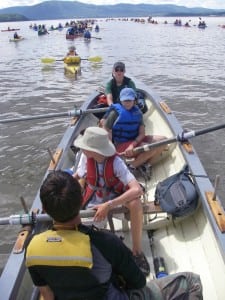 On Aug. 9, more than 150 paddlers, both Native American and ally, arrived in New York to attend a special event at the United Nations concluding the Two Row Wampum Renewal Campaign’s 13-day symbolic enactment voyage. This voyage commemorated the 400th anniversary of the creation of the Two Row Wampum treaty between the Haudenosaunee and the Dutch settlers.

On Aug. 4, exhausted but not lacking in spirit, the Cold Spring-based Building Bridges Building Boats (BBBB) crew completed their portion of the trip as a non-native paddling group. The BBBB crew commenced their voyage with the Two Row on July 29, at Schodack Island State Park with a hearty dinner of potato chips and buffalo stew in the spirit of indigenous-ally cooperation.

The BBBB crew rowed for seven days, under predominantly blue and sunny skies. Each day as the early morning sunlight streamed into their tents, the rowers gathered with dozens of other paddlers at the breakfast tent. After a fortifying meal on the dew-soaked grass, the rowers and paddlers quickly broke camp, packed away their tents and began another day on the Hudson River.

Each day on the river was a new experience, to say the least. The paddlers and rowers assembled in two rows representing non-native allies and indigenous peoples and began their journey down the Hudson River, completing between 10 and 16 miles during the day. Over our gunwales we saw lighthouses, coastal marshes and even bald eagles, which followed us for three days. 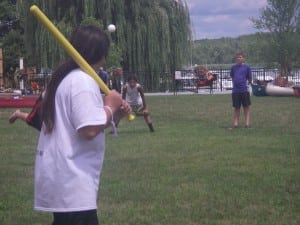 Often we stopped for lunch on the waterfront to unwind for a couple of hours before continuing on to reach the day’s final destination. One of the most notable of these mid-day lunch stops was Athens, where an impromptu Wiffle ball game was organized and followed by a group jump into the Hudson.

On most nights after dinner there were traditional Native American social dances and speeches on various topics related to the campaign. Central themes included protecting the environment, understanding native treaties, respecting people of various backgrounds and obeying the main tenets of the Two Row Wampum: the Good Mind, Power/Life Energy and Peace.

An ever-present theme was an environmental awareness, which gave the campaign its resonance. Indeed, the paddlers and rowers were deeply immersed in the ever-changing Hudson River environment.

On no other day was this fact more evident than on Thursday, Aug. 1, which became the most memorable day for this author and I daresay everyone on board a BBBB boat that day. The morning started off innocently enough with the 150-plus paddlers rising to early-morning sunshine and pleasant white clouds dotting the horizon. 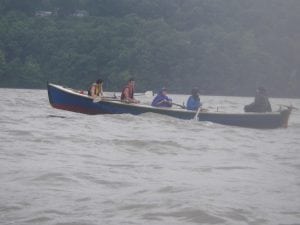 A BBBB boat during the passage to Norrie State Park.

However, the BBBB crew and its director, Dave Hardy, knew that there was more to this day than the calm morning skies. The marine radio had, days earlier, predicted heavy rain and strong winds, but the forecast had softened in recent days. Neither forecast called for Mother Nature’s onslaught that would follow.

The crews were also short a couple of rowers, causing a power deficit which became more acute as we rowed a 500-pound boat 16 miles in driving rain. The inhospitable conditions prompted one rower to comment: “It’s like putting your oar in cement.”

The crews pushed through the final nine miles against a steady 10-knot headwind gusting to 15 with a cold rain triggering the need to continuously bail out the boats. Drenched, shivering, and completely exhausted, the BBBB crew finally arrived at Norrie State Park marina, where they were greeted by the dockmaster and Two Row personnel. With the permission of the kindly dockmaster, the BBBB crews were able to take shelter and pitch tents under the protection of a day-use pavilion. 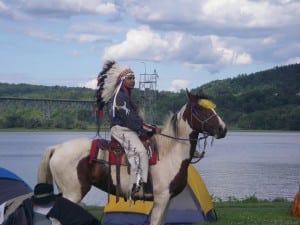 A Unity Rider makes his way on horseback through the paddling crew’s campsite.

It was with mixed emotions that I greeted my mother and waved goodbye to my still damp BBBB crewmates under the pavilion following completion of my leg of the journey. The trip had proved to be a valuable lesson in American history and environmental awareness, not to mention a great time with a diverse group of paddlers hailing from all over the Northeast.

Following Wylie’s scheduled deliverance the rest of the two crews settled down to multiple slices of pizza delivered to our pavilion by BBBB’s erstwhile ground crew. Later that night with the help of one of the indigenous paddlers, we pulled a leaky boat up on the trailer launch and attempted a repair by flashlight. After a technical conversation regarding the best patch system our paddling friend and I were able to affect a fix with epoxy goop and duct tape.  –David Hardy