The Swiss painter Ursula Schneider, watching a fireworks display from her home on the Hudson, was inspired to translate those perfect spheres of exploding light into an “ideal … created by my mind” into a language of graphic symbols, distilled from the real world.

Pies & Ponds, works by Schneider, is on view at Marina Gallery in Cold Spring from Sept. 6 to 29. An opening reception for the artist will be held from 6 to 8 p.m. Friday, Sept. 6. 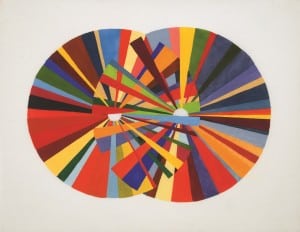 Schneider, an elfin presence with close-cropped grey hair and Le Corbusier glasses, was educated at the Kunstgewerbeschule in Zurich and the Keramische Fachschule in Bern. Emigrating to the U.S. in 1968, she received an MFA from the San Francisco Art Institute and went on to teach there, as well as at the Cooper Union and Sarah Lawrence College, where she is currently a professor.

Fireworks, Hudson River, the largest painting in the show, is also the seminal piece. From this representational river view – maybe a psychedelic take on a Hudson River School landscape – we witness the transformation of the three-dimensional world of the fireworks show into a flattened graph of shimmering color. All paintings, of course, reduce the real, dimensional world into a flat simulacrum, but Schneider pushes it further still, beyond classic methods of modeling and shading, into the super-flat realm of pie charts and graphs.

The painting Two Pies looks like a PowerPoint presentation run amock; two rainbow-striped pie charts, which would be at home in any corporate boardroom, collide in a splintering crunch of color. Throughout the show there is evidence of battling (or is it “interweaving?”) Twosomes: discs merge and then explode into refracted light. The graphic playfulness continues through Two Ponds #2 where we see, through two peepholes, a planetary whirl of concentric orbits. Schneider also enjoys layering-up the confusions and ambiguities. She’ll interrupt the concentric rings of “a stone dropped into a pond” with the jagged radii of those circles. And then, as if that’s not enough, she’ll toss a spiral into the mix, further dicing up the colors into a swirling vortex of confetti, as in the painting Concentric & Spiral.

Schneider’s painting method is unique. She first makes what she calls “panels,” by laminating four layers of fine, nylon fabric with a clear liquid acrylic. The weave of the fabric layers intersect in subtle moiré patterns, hinting at the overlapping painted imagery that she will later apply. Then, using the drawing program Illustrator, she superimposes multiple elements into a single image which is eventually transferred to the semi-rigid panels and filled in with thin acrylic paint.

All these clashing dualities remind one of various philosophical and religious systems: the Tai-Chi symbol of the Taoists; the diagrams of Rudolph Steiner; the id/super-ego dichotomy of Freud; the Dionysian/Apollonian split of the ancient Greeks; even the eternal battle of good and evil in Christianity.  Schneider admits being informed by these ideas, but she refuses to divulge which ones. “I want the viewer to decide,” she says.