A proposed fracking ban and a demand that homeowners maintain private roads come up for public comment when the Town Board convenes hearings this month. The fracking ban, private-road upkeep law, and four other draft laws will be the subject of formal public hearings at 7:30 p.m. on Wednesday, Sept. 25, at Town Hall.

The various draft laws are intended to clean up and streamline various provisions of the town law code, add new material as necessary, and make everything consistent with the updated zoning law adopted in 2011. In some instances the changes merely reflect changes of name, such as calling the wetlands inspector (old terminology) the natural resources review officer (new title).

Others cover changes in practice and the need to adjust the code accordingly, as in the case of making the former Conservation Advisory Council a full-fledged town committee, the Conservation Board, with increased authority. However, the ban on fracking and the law on private-road maintenance add new topics – albeit on old concerns – to the mix.

The Town Board has been planning a fracking ban since summer 2012, joining other towns and levels of government in opposing fracking – or hydraulic fracturing – a controversial method of extracting fuel from underground rock formations, such as the Marcellus Shale belt in southwestern New York, creating a brine-like liquid and other leftovers as by-products. In March, the Putnam County Legislature banned the by-products, which fracking opponents regard as hazardous pollutants. 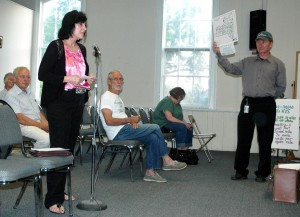 According to the stated purpose of the draft law, although fracking and similar methods “are not permitted in any zoning district in the town, the Town Board desires to take further steps to ensure that hydraulic fracturing, directional gas drilling or any ancillary or related uses or activities do not take place” in Philipstown.

It adds that “serious health and environmental impacts caused by these uses could threaten” residents’ health, require massive amounts of water, have a negative on town highways, and “cause other aesthetic, environmental and public health impacts, resulting in the degradation of the quality of life in the Town of Philipstown and the town’s infrastructure.”

The law would amend the zoning law (Chapter 175 of town code) to “prohibit hydraulic fracturing and associated activities, including disposal and transport of products and wastes in connection with drilling for fossil fuel products.”

Released in August, the draft does not apply to “fossil fuel products derived from hydrofracking conducted outside of the Town of Philipstown and brought into the town from elsewhere,” or to “materials used in connection with hydrofracking” outside of Philipstown or “shipment of such materials or products through the town.” The latter exemptions did not appear in a version of the draft ban released in March.

Another draft law, to amend Chapter 112 land development sections of town code, would “require maintenance agreements for open-development-area subdivisions accessed by shared rights-of-way.” The intent, according to the law’s stated purpose, is “to solve a long-standing problem in the town”: the construction of houses in rural areas and installation of a road for access, with nothing to ensure that new homeowners provide for road upkeep. The Town Board has expressed frustration with the lack of a law and the town Planning Board has tried to institute reforms on a discretionary basis when handling applications.

“In the town, this is one of the biggest complaints,” Philipstown Supervisor Richard Shea said last January, a year after the board decided to find a way to deal with the issue. 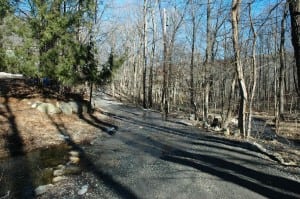 Excess water on Upland Drive, a private dirt road near Old Albany Post Road, has added to concerns about upkeep over time. A proposed town law would demand that subdivision developers address road maintenance in advance. Photo by L.S. Armstrong

Without rules, messy disputes can erupt between neighbors over road upkeep and who pays for it; residents can also mistakenly assume that a private road, once in place, becomes the responsibility of the town government.

In July, two men faced charges in Philipstown Justice Court for allegedly trespassing on someone else’s property in attempting to correct flooding on Upland Drive, in southern Philipstown. Both denied that trespassing occurred when they tried to fix the inadequate drainage along the road. “We decided to do what we had to do,” one said later, outside the courtroom.

A supporter of the pair claimed that in part the problem involved a homeowner who “has never put a dime into the road to repair it,” forcing others to bear the burden.  Last March, the section of drive near the intersection with Old Albany Post Road held several inches of water and residents complained of further inundations after that.

The proposed road upkeep law would stipulate that a developer “submit a right-of-way maintenance agreement,” or, as an alternative, a legally acceptable property owners’ agreement for road maintenance, to obtain approval for a subdivision. The draft specifies that such documents must ensure that lot owners or homeowners can be charged “for their proportionate share of the maintenance costs of the private road”; that “the road will be maintained and kept open to permit emergency vehicle access”; and that the provisions “shall bind all lot owners in the subdivision and their successors” as owners.

The other four draft laws to be addressed at the public hearing involve amendments on timber harvesting (town code Chapter 159), wetlands (code Chapter 93), technical corrections and alterations to the zoning law, and the Conservation Board (mentioned in various chapters of town code).