Few people could claim greater Hudson Highlands roots and influence, both cultural and historical, than Robert Weir. A 19th-century West Point drawing teacher for 42 years, he won renown as a painter and nurtured several other important artists including his sons, John F. Weir and J. Alden Weir and the famous James Whistler who studied at the U.S. Military Academy. 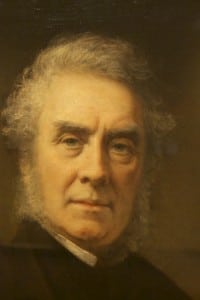 Civil War Gens. Ulysses S. Grant and William Tecumseh Sherman and Confederate States President Jefferson Davis were among Weir’s more famous cadets at the military academy. Drawing, in an age before photography (let alone digital imaging) could be easily applied, was an important observational skill for a military officer.

Generally considered the best of Weir’s work, Embarkation of the Pilgrims, was a commission by the U.S. Congress and it was installed in the Capitol Rotunda in 1844 after a display at West Point and a tour around the country.

In a retrospective of Weir’s work, the first in 30 years, Boscobel House and Gardens in partnership with the West Point Museum is presenting 37 examples of Weir’s different styles of work, including landscapes and portraits. The exhibit, Robert W. Weir and the Poetry of Art, which runs until November 30, is housed in the Boscobel gallery beneath its historic Federal period house. Gary Allen Hood, retired Curator of Art at the West Point Museum who now resides in Oklahoma, organized the show.

“We’re happy just to be able to cull all the pieces together in one place and be able to show his myriad of different styles, landscapes, allegorical scenes, genre scenes, it’s quite nice to be able to do that,” said David Reel, director of the West Point Museum.

“We are delighted to have his works there (at Boscobel). It’s nice to have the meshing of the two locations across the river, so close and yet separated by a wide expanse of water. So now we can get people back and forth from both west and east sides of the Hudson and really get a true feeling for the whole area. There is a great cultural exchange I think in the Hudson Valley. Many of the institutions look to work with each other to promote the Hudson Valley and have people come up and experience what we have,” said Reel.

Reel spoke in the library of the West Point museum during a discussion with Cold Spring contemporary artist Rick Gedney held at the request of Philipstown.info to mark the opening of the Boscobel exhibit and to underscore Weir’s place in art history and his influence even in the 21st century. (A video based on the discussion accompanies the article).

“I have always appreciated him as a history painter. It’s not very often these days you see history painters. He was for me a draftsman and his belief in drawing as the basis of a good painting was important for me and is incorporated in my work,” said Gedney whose paintings often depict scenes from the Hudson Highlands.

“One of the fascinating things I find about Weir was that he wanted to get his students outside of the studio and get them into the clean air and be able to paint outdoors. He believed very much in that method of teaching,” said Reel. 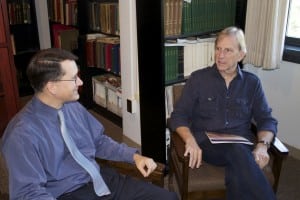 Reel pointed out that Weir arrived at West Point in 1834 from New York City where he would have encountered the painters who were seeking to capture the beauty of the Hudson Valley and especially the Highlands. And in turn said Reel, many of the same painters would visit West Point creating a regional social circle.

“I have enjoyed Weir’s work through thinking about Thomas Cole (considered by many the founder of the Hudson River school) and what they called at the time the Arcadian spirit which blended the idea of draftsmanship and nature and human ability to coexist peacefully in nature during that time, with the sense of realism and the views they were experiencing as they came up the Hudson River,” said Gedney. He also acknowledged that Hudson River painters would paint scenes that often ignore blights on the landscape to create a vision of the possibilities that were most important to them.

Both Gedney and Reel acknowledged the irony that many of the views that inspired the painters of the 19th century were available today, including from West Point and Boscobel despite a long spate of industrialization along the river in the 19th century. 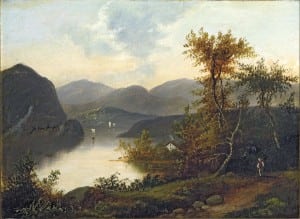 “I can look now nearly two hundred years later at the same views. I am grateful to all the environmentalists that have done all their work to keep all the area sound. It’s also interesting to see how nature has reclaimed itself since many of the factories [have] gone,” said Gedney.

“It’s great that you and other artists can come up here and paint the same scenes,” agreed Reel.

“My interest in looking at the Hudson River school has a lot to do with the spirit of the works that they were trying to incorporate. The whole idea of nature, their human experience and how that related to God in their understanding of it. Many of them were very religious and tried to understand their experience and where they were in their lives,” said Gedney.

“Weir was very much a family man, a religious man,” said Reel. And he pointed out the exhibit reinforces that observation with expert sketches and paintings illuminating his family life as well their worship at the Church of the Holy Innocents which is located across from West Point in Highlands Falls. The church was designed by Weir and Reel said construction was largely paid for by Weir with the proceeds he received for the Embarkation of the Pilgrims. 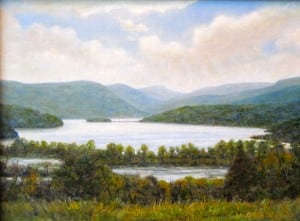 “Boscobel View” by Rick Gedney.
Gedney’s paintings are available at RiverWinds Gallery in Beacon. Image courtesy of the artist

Other works in the exhibit demonstrate Weir’s keen interest in literature, especially the classics with depictions of Dante and Virgil from Dante’s Inferno and also a scene from Cervantes’ Don Quixote.

“One of my favorite artists was James McNeill Whistler who was one of Weir’s students,” said Gedney. Whistler left West Point before graduating eventually becoming a famous painter. “His drawing is so sound … which I have to think back on his early instruction with Weir.”

“I think Weir was a big influence on Whistler, absolutely,” said Reel.

Speaking of the Weir sons, especially impressionist J. Alden Weir, who built solid reputations on the American art scene, Reel said: “I think sometimes the sons overshadow the father as far as recognition or awareness in the art world but his influence is evident in their works.”