The Cold Spring Planning Board inched tentatively forward with its first phase of consideration of the Butterfield LLC plan last Wednesday evening (Sept. 18). But the possibility of contentious, even litigious proceedings loomed large despite only brief remarks made by consultants to the Planning Board and representatives of the developer. 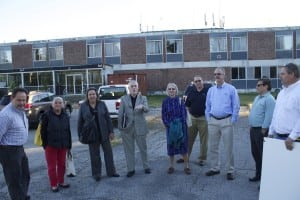 The five-member board began its deliberations at 6 p.m. with a fresh air walkabout of the 5.6-acre old Butterfield Hospital site along with representatives for the developer Paul Guillaro. Discussion ranged casually from whether test borings had been done to assess the presence of rock formations underground to where the semi-underground parking for senior citizen housing would be located to setbacks from the street for the three residential houses planned for the site.

The board then convened at the Village Hall for about 45 minutes before going into executive session to confer with the board’s new counsel. Getting with their lawyer seemed a prudent step by the board given the battle lines drawn just before they did so.

The planning consultant to the board, Chuck Voss of the firm Barton & Loguidice, addressing the board publicly for the first time, laid out a preliminary course of action that anticipated a review of several matters of possible “adverse environmental impact.” Voss first explained that the Butterfield application was a Type 1 under the State Environmental Quality Review Act (SEQRA), the provision of New York state law that governs review of development projects.

According to a memo Voss wrote prior to the meeting, “the fact that an action or project has been listed as Type 1 carries with it the presumption that it is likely to have a significant adverse impact on the environment and may require an EIS (Environmental Impact Statement).” A similar position was also taken by Planning Board attorney Anna Georgiou.

Continuing Voss wrote: “Based upon our review of the EAF (Environmental Assessment Form) for this action and SEQRA regulations, we have identified the following as having the potential to pose a significant adverse impact on the environment.” 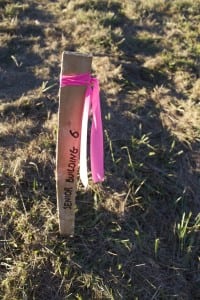 Markers have been placed at the Butterfield Redevelopment site.
Photo by K.E. Foley

“The above list is not exhaustive,” wrote Voss. “The Planning Board is encouraged to carefully consider the EAF and to review all relevant areas of environmental concern prior to making its Determination of Significance for this action,” he advised.

Earlier Georgiou advised the board: “To require an EIS the lead agency must determine that the action may include the potential for at least one significant adverse environmental impact.”

As the lead agency under the SEQRA review, the Planning Board has to decide whether or not to make a negative declaration, meaning that the board is satisfied there are no likely negative impacts to the environment from the Butterfield project, or a positive declaration meaning the board has such concerns and therefore requires the applicant to do an EIS.

An EIS is a more elaborate examination of the environmental issues that are addressed in the EAF. It involves required testing and studies, which cost considerably more time and money, designed to substantiate the absence of adverse impact in those areas the planning deems to be of concern. Alternatives to aspects of the existing plan can also be required as a way of deciding the best approach to a particular issue such as traffic.

“We feel there are some significant impacts here that warrant a much closer look,” said Voss.

“I’ve got to tell you straight up that it’s kind of surprising, indeed I’ll use the word shocking, to hear that someone who has just been retained – and after only a preliminary review – that ultimately he thinks there could be a pos dec (positive declaration) here.” That’s way too premature,” declared Steven Barshov, attorney for Butterfield LLC.

“As to the Type 1 designation,” Barshov continued, “we are adjacent to the Grove, shall I be kind or should I be blunt  (“Be accurate,” suggested Barney Molloy, Planning Board Chair.)

The Grove is on the registers of both national and state historic sites and its preservation has many supporters in the community as well as detractors who don’t believe more government funds should be spent on it.

“We do not think there are potential adverse environmental impacts from this project. We think this project is what the community has wanted,” Barshov continued.

Tim Miller, the lead planner for Butterfield LLC, echoed Barshov’s points particularly that the proximity to the Grove was the technical basis for considering the need for further studies. He argued: “It wouldn’t matter what was being built; as long as it was next to The Grove it would be a Type 1 project.”

Otherwise Miller said the developer had provided plenty of data in the current EAF and in previous submissions during past reviews and that it should be sufficient to decide on moving forward on the project with a negative declaration. He further argued that current zoning would allow a “major hospital to be built.”

He did not address whether the building of a hospital even as a matter of right would not still trigger the need for an EIS.

Miller said the developer had hoped that a schedule for the review of the project would be forthcoming and that the requirement for an EIS could put it a year away in my opinion.”

Planning Board Chair Molloy said Oct. 2 would be the board’s next meeting when it would begin a technical review of the current EAF.  That document is available on the Cold Spring Village website coldspringny.gov.