Artist made his first work with electric light in 1961

Dia:Beacon presents a Gallery Talk at 2 p.m. on Saturday, Sept. 21. Alena J. Williams will give a gallery talk on Dan Flavin. 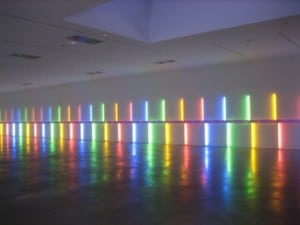 A 1996 installation by Dan Flavin in Houston

Flavin was born in 1933 in New York City, where he later studied art history at the New School for Social Research (1956) and Columbia University (1957–59). He made his first work with electric light in 1961, and began using commercial fluorescent bulbs in 1963.

Outside painting and sculpture, few artists are more identified with a particular medium than Flavin. After 1963, and except for his drawings and prints, Flavin’s work was composed almost entirely of light, in the form of commercially available fluorescent tubes in ten colors and five shapes.

Williams is an art historian and curator based in Berlin. She is the curator of Nancy Holt: Sightlines, a traveling exhibition for the Miriam and Ira D. Wallach Art Gallery at Columbia University in New York (2010-13) and the editor of a companion book published by the University of California Press. She has lectured and curated film screenings internationally.

The gallery talk is free with museum admission. For additional information, visit diaart.org. Dia:Beacon is located at 3 Beekman, St., Beacon.