A couple of weeks ago, this column covered the impact of invasive Japanese barberry. Several readers offered comments on the website about it, including this question. Here’s more about invasive plants in Philipstown.

Reader question: Speaking of invasive plants — take a look at the kudzu that is growing along Bank Street. I’m familiar with the stuff from having grown up in North Carolina, where it takes over whole fields and covers trees. It’s also called “mile-a-minute” vine and has been documented to grow 18 inches in one day. Until this summer, we’ve never seen kudzu in New York as it totally withers with the first touch of frost. How in the world did it get here? Is this climate change in action? 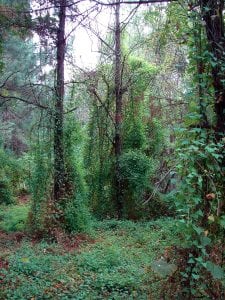 Mile-a-minute weed covers an area in a forest. Leaves are triangle-shaped and distinctive. Source: Wikimedia

Although I haven’t seen the vine that you’re referring to, it’s probably a different vine with similar behavior. Kudzu or Pueraria Montana has not been documented in this part of New York, although it has been found in Long Island. Mile-a-minute weed or Persicaria perfoliata has been documented in PutnamCounty, though. While mile-a-minute weed covers anything in its path, just like kudzu, and can envelop trees and all the surrounding vegetation, it is a different vine. Both are invasive and serious threats to the environment.

Kudzu, known as “the vine that ate the South,” and mile-a-minute weed both grow vigorously and quickly, as you mentioned, 6-12 inches daily. Their leaves are distinctly different, though, and that’s one way to distinguish between them. They’re different types of vines, too.

Kudzu is a flowering perennial and mile-a-minute weed is an annual. With climate change, yes, kudzu can move north as warmer temperatures provide a suitable environment. This is true of many plants. Kudzu spreads through runners and rhizomes, though, not by seeds, so its dispersal isn’t as simple.

Mile-a-minute weed, however, is a self-pollinating vine that has prolific amounts of seeds. Birds eat its fruit and disperse seeds, the fruit can float in water and travel long distances to spread seeds, and seeds can last for three years before germination.

Both kudzu and mile-a-minute weed smother all other vegetation if left unchecked by blocking photosynthesis. In my opinion, mile-a-minute weed is a more difficult threat to manage because it is so hardy and adaptable. Kudzu can be mowed to the ground repeatedly and kept in check and livestock will feed on it.

Mile-a-minute weed has barbed leaves, making it abrasive to handle, doesn’t have any animals that will eat it, and has to be pulled out by the roots to control it. It has become so noxious in Central Park in New York City that this summer, park managers took the unusual step of introducing a weevil into the landscape to eat it.

Weevils have been used as cultural controls effectively in several other parts of the country and in parks. Many people in the gardening community expressed concern over the balance that is upset when introducing another non-native species into the environment, but the results remain to be seen for now.

The battle against invasive species for our local environment can seem futile when you look around at all the problems, but there are major efforts at control. A reader recently mentioned the New York-New Jersey Trail Conference Invasive Strike Force, a team of volunteers tracking the spread and threats of invasive plants along the 2,000 miles of trails they monitor.

iMap Invasives is another volunteer-fueled effort that is active in New York state tracking the spread of invasive plants and identifying problem areas that need to be managed. Both use GPS systems to map and document problem areas and offer training to volunteers. Make the most of a walk in the woods by observing what you see and then reporting as a volunteer to one of these projects.

In our home landscapes, we can be responsible stewards by excluding non-native plants with invasive qualities, like Japanese barberry, and nurturing native species that have beneficial qualities for wildlife and birds. Controlling and eradicating invasive species using the least toxic methods available is another big step. For example, hand pulling weeds rather than spraying herbicides or if herbicide is truly necessary, carefully applying it following all the label instructions. Just don’t give up!