It’s not easy being a tree these days. Hemlocks are dying out due to damage from woolly adelgid infestations. Asian long-horned beetles threaten maples, birch, and poplars, among others, and now the emerald ash borer has been found in New York. Although it’s small, the emerald ash borer is capable of wiping out ash trees to the same extent that Dutch elm disease devastated the American elm population. Although it has not been confirmed in Putnam County yet, it’s been found in 12 counties in New York, including Dutchess, Ulster and Orange, and the alarms have been sounded. 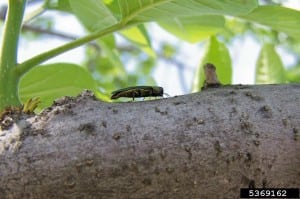 Quarantines have been effective in containing a pest or pathogen to manage past problems and preventing its spread. In Michigan, where the emerald ash borer was first discovered in the U.S. in 2002, the beetle has destroyed more than 30 million ash trees in the southeast part of the state alone, according to the state Department of Agriculture. It’s hard to imagine the loss of that many trees.

This means that trees in your own yard could be affected. The first step is to be on a first name basis with your trees. Identifying and inventorying the trees around where you live helps you determine the risk level. No ash, no problem, but if there are ash trees nearby, they need to be inspected and monitored.

The emerald ash borer is active during the summer and leaves a D-shaped exit hole in the bark. Signs of distress in the ash tree include dying canopy and yellowing or brown leaves. Call an arborist or the local Cornell Cooperative Extension (CCE) office for assistance if you suspect damage from the beetle before clear-cutting all your ash trees, though. There are treatment options and trees that have important landscape features can be saved. 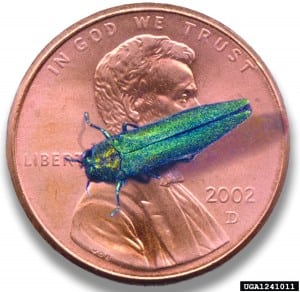 In an unprecedented move that underscores the seriousness of the situation, the CCE and the Putnam County Soil and Water Conservation District have teamed up to assist town managers. They recently reached out to all six towns, three villages and the county government municipality to alert officials of the potential threat and to urge that management and mitigation efforts be addressed in budgeting and planning.

They estimated that it could cost $500-$1,000 per tree to manage the emerald ash borer. When Dutch elm disease hit, no one was prepared for it and a lack of money and resources impacted its spread. Knowing that the threat is nearby, Philipstown local leaders can respond before the problem affects trees and taxpayers alike.

The CCE and Soil and Water Conservation District advises a multifaceted plan that begins with creating an inventory of ash trees, just like homeowners should. Once the scope of the potential problem is understood, town managers can determine which trees are “high-value.” For example, an older ash tree that is a central landscape feature would be a greater loss, potentially, than a young ash tree in an out-of-the-way spot. Trees that could threaten buildings or safety as they continue to get bigger might not be worth saving if they’ll need to be removed at some point in the future, anyway.

Pesticide treatments are effective against the emerald ash borer and all hope is not lost, trees can be saved. As usual, the earlier the beetle is detected, the better the chance treatment can be effective. Jennifer Stengle, the Putnam County CCE Community Educator, said, “We recommend a pesticide that can be injected into the tree. It stays in for two-three years and it’s more environmentally friendly than applying it to the soil.

By injecting it into the tree, it has less potential to spread into the environment and more of it gets into the tree.” Stengle cautioned that currently the treatment was not available for commercial sale, though, and had to be applied by a professional. Stengle is the representative from the CCE who has offered her services to town officials and she advises anyone who is concerned about a particular tree to contact their office (845-278-6738). We’re fortunate to have such great leadership and resources available to combat this threat.