Phil Ciganer, the owner of Towne Crier Café, is overly modest when he describes the debut of his music club.

“I spent most of my teen years in night clubs, where I developed a passion for that intimacy between musicians and the audience,” said Ciganer. “I did an about-face at a time when I had a golden opportunity at my job as a stock trader. I came to the realization that working on Wall Street was not for me. I left, and spent two years researching communities that would be right for my idea of a coffee house-style music venue.” 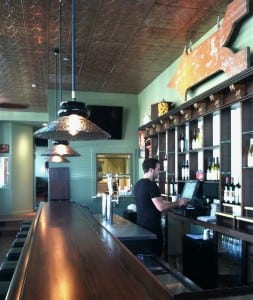 A directional sign from the old Mt. Beacon ski resort hangs over the bar. Hudson Beach Glass designed and produced the lights.

Ciganer initially decided on Austin, Texas, as the place to be (at a time when there weren’t many music venues there) but was sidetracked by an artist-friend who needed one of his sculptures to be delivered to an old general store and hotel in the hamlet of Beekmanville, N.Y. He opened Towne Crier Café there in November 1972. The premiere act was the Wretched Refuse String Band, led by the late Richie Shulberg, also known as WBAI-FM’s radio personality, Citizen Kafka.

This weekend, four decades later, the Hudson Valley’s storied music venue is celebrating a grand opening at its new location at 379 Main St., in Beacon. Performances include top-tier acts such as the homegrown Grand Slambovians (formerly known as Gandolf Murphy and the Slambovian Circus of Dreams), the Battlefield Band, and The Defibulators.

With all of the last-minute preparations involved in opening a brand-new 8,000-square-foot facility, it was difficult to find a quiet moment to interview Ciganer. As the Spirit of Beacon Day Parade marched by outside, he talked about the new place.

“I leased half of the 16,000-square-foot unit,” he said, referring to the former DMV building that stretches for most of the block between Veteran’s Place and Teller Avenue. “There was nothing here except a cinderblock wall dividing two elevations, which worked fine for me for tiered seating. Total capacity of the space is 253, with approximately 150 seats in the theater. Everything is state of the art.”

A wall separating the dining room from the theater is collapsible, allowing him to open up the space for a more club-like setting. When asked how much the build-out cost, Ciganer answered, “A lot. Seven figures. By far more than any of the other locations.” 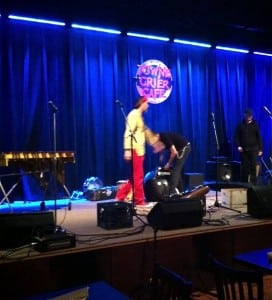 Setting up inside the theater.

During a tour of the theater, soundman Joe Johnson was setting up a band called TriBeCaStan for a “soft opening” performance that evening. The night before, local musician Stephen Clair filled the house for his record release party. “We were a bit overwhelmed by the crowds,” said Ciganer. “But that’s a good problem to have.”

“We take our food as seriously as our music,” he continued.  His executive chef is James Kane, and his pastry chef, Mary Ciganer (née Murphy), is also his wife. Shortly after the birth of Towne Crier, she left her job at Le Cirque to create its signature desserts.

Just inside the front entrance is a bar covered in an eye-catching wood mosaic, a façade created by musician Larry Zampino. A close friend of Ciganer’s, who is also a master carpenter, Zampino was the first-ever act in Pawling about 25 years ago. An oversized red arrow, a remnant of Mt. Beacon’s old ski resort, hangs from the ceiling behind the bar (Note to readers: Ciganer is in search of photo documentation). The light fixtures were designed and produced by Beacon’s Hudson Beach Glass.

Naming the business all those years ago was also circumstantial. “I was almost settled on ‘The New Moon Café’ even though it didn’t feel right to me,” explained Ciganer. “One night while I was falling asleep, I overheard a friend talking to another friend about his recent trip to Norway, and how the small towns in the north still have the guys with bells in the streets. I jumped up and said, ‘That’s it! That’s the name.” 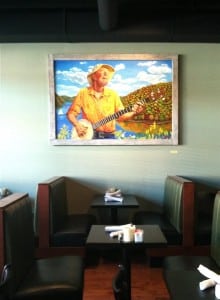 A new painting of Pete Seeger by Michael D’Antuono in the Towne Crier Cafe.

Soon after the opening of the first Towne Crier, the English folk singer Louis Killen had to cancel a sold-out show at the last minute. Held up in New England, he offered to send a friend in his place. That friend turned out to be Pete Seeger, which of course was fortuitous for Ciganer. Their relationship continues to this day, on and off the stage. Ciganer served as director of the Clearwater Festival from 1976 to 1981, and a large portrait of Seeger, a new painting by local artist Michael D’Antuono, is prominently displayed in the restaurant.

Ciganer is aware of the impact his new business makes on Main Street’s middle corridor, a section of the city where restoration had been lagging behind the historic East and West ends. All of the spaces in the unit are now rented out. “They say business makes business,” he said. “I’ve been made to feel very welcome here.”

Referring to a hold-up of his liquor license by the State Liquor Authority, Ciganer credits local and state officials for coming to his aid. He made it clear that relations with the Masjid Ar-Rashid center across the street are good. “There is no opposition from them. Even before I made a decision to move here, I met with the imam to let him know what my thinking was.” While the SLA makes a final determination, which Ciganer is confident will be positive, the Towne Crier is serving beer and wine. 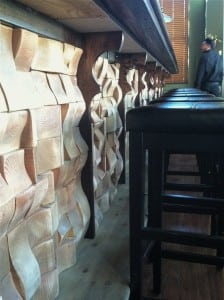 The Slambovian show on Saturday, Oct. 5, is unfortunately sold out (with a wait list), but plenty of shows are lined up over the next few weeks for which tickets are still available, including Bruce Molsky on Thursday, Oct. 10, and Rickie Lee Jones on Sunday, Oct. 13.

The Towne Crier is open every night for dinner and on Saturday and Sunday for lunch.

It hosts weekly Open Mic Nights on Mondays and Wednesdays, with the next event scheduled for Wednesday, Oct. 9. Interested musicians can sign up online at townecrier.com, or show up before 7 p.m.