Referring to the thousands of dollars voluntarily collected for a pavilion at the town park on Route 9D, the Philipstown Town Board last week authorized the start of construction of the structure and waived the usual permit fees.

Also during its Oct. 9 workshop, the supervisor and four councilors questioned aspects of the Garrison Volunteer Fire Company (GVFC) plan for a referendum on a benefits increase and called for talks with the fire company leaders. The board likewise began reviewing data for the 2014 budget. [See: Town Board Takes Up 2014 Budget; Revisions Likely]

On a unanimous vote with little comment, the Town Board allowed the Friends of Philipstown Recreation to begin building the park pavilion, which will include bathrooms, a concession area, storage, and space for picnics for year-round use. The Friends, a nonprofit corporation, provides funds and other assistance to support the town government’s recreation programs. Since launching a campaign in July, the organization has raised $99,543, with more in matching money, for the project.

Supervisor Richard Shea expressed gratitude to Claudio Marzollo, president of the Friends of Philipstown Recreation board, who led the funding campaign last summer by offering matching dollars to subsidize the pavilion.

“We’ve been working on this project since 1996,” Marzollo noted, in turn thanking the board for its backing.

After receiving correspondence from residents, the Town Board further discussed GVFC desires to increase the basic veteran firefighter stipend and hold a referendum on the issue in December. Under the “Defined Benefit Length of Service Award Program” or LOSAP, the money rewards volunteer firefighters for their years of dedication. 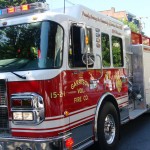 At its formal monthly meeting Oct. 3, the board had agreed to the fire company’s proposal for holding a referendum, to give Garrison voters a chance to approve or deny the higher benefit – $20 instead of $10 monthly. According to the fire company, the change would boost the LOSAP cost annually from $36,324 to an estimated $58,647.

Councilor Dave Merandy observed that the referendum would occur between 2 and 8 p.m. For most elections, voting occurs from 6 a.m. to 9 p.m.  The GVFC’s polling station, at the main Garrison firehouse, “should be open all day, if you really want a vote that means something,” Merandy said. “They should expand those hours.”

Shea voiced similar doubts about the timing. “Why don’t we talk to them,” he suggested.

Van Tassel wondered about some of the GVFC financial data. “I think we should meet with their board and find out where they got these numbers, before a public hearing” on the issue, he said. “They will have to be able to answer these questions at a public hearing,” part of referendum-related activity.

Again Shea concurred. “We’re not endorsing anything,” he pointed out. “All we’ve agreed to so far is their ability to have a referendum.” Town Board members must “do our part in making sure the public is aware this is going to happen,” he said. “It’s a big deal. It’s going to have a big impact on taxes.”

He and Van Tassel explained that only taxes of those in the Garrison fire protection district would be affected.