Re>Think Local’s first anniversary celebration marks not just a successful beginning for the non-profit collaborative but also the launch of a multi-year campaign that will drive public awareness for its primary ambition: to co-create a vibrant, sustainable and locally rooted economy in the Hudson Valley. 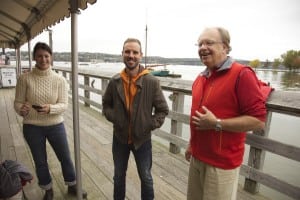 Re>Think Local’s Doreen Johnson, from left, and Scott Tillitt, center, with Co-Founder and Board member, Ajax Greene, at a recent Remix event. (Photo by Ilene Cutler)

The early milestone is being celebrated at The Falcon in Marlboro on Tuesday, Nov. 12, with live music by Big Joe Fitz and The Lo-Fi’s, dancing, a silent auction, complimentary hors d’oeuvres and a cash bar.  Entry costs only $15 for non-members. If you aren’t familiar with Re>Think Local and run your own business in the area, you might want to check it out.

By defining the mission of Re>Think Local, Co-Founder and Board Chair Scott Tillitt, who lives in Beacon, provides a primer on the national “localism” movement that is driving the organization’s momentum in our neighborhoods.

“We’re looking at the economy from a holistic perspective,” said Tillitt, who runs Antidote Collective and BEAHIVE in Beacon. “Examples of where this happens are independent retail, sustainable food systems, renewable energy, wellness, and ‘community capital,’ local credit unions instead of multi-national banks.”

Doreen Johnson, Director of Events & Communications, said, “It’s a movement away from the big Wall Street mentality toward a Main Street mentality. It’s promoting a thriving economy by keeping it local with your dollars.” Johnson is one of three paid staff members of Re>Think Local.

“If you’re doing business with your neighbor, there is a deeper connection to them. If you live near a creek, you’re not going to dump toxins into that creek,” said Tillitt. “A community that keeps its money flowing locally is more vibrant, and more resilient to larger global economic forces.”

Tillitt describes Re>Think Local as a “network of networks” that covers Dutchess, Ulster and Orange counties. There aren’t any members yet from Putnam and Columbia has its own small network. It is a member of the larger Business Alliance for Local Living Economies (BALLE), which has been marketing the principles of localism for almost 11 years. In its first year of operation, Re>Think Local signed on more than 100 independent businesses and non-profits as members, including 14 from Beacon.

“I joined Re>Think as a local business owner because I recognized in this initiative a fundamental aspect that is important to me: building and expanding positive relationships,” said Ed Roy, owner of J6 Mediaworks. “I find that in working with and purchasing from locally owned businesses I have a face that goes with the dollars I spend. I get a chance to know that person and support their dream.”

“The first year has been about raising awareness for who we are and what we do,” Ms. Johnson said. “We did this through networking events called ‘remixes,’ where members meet other members and maybe recruit new faces. We organized ‘localism 101’ workshops and one-day conferences, including a very successful wellness conference in September at the Omega Institute. We helped support the first-ever TEDxLongDock in Beacon.”

The focus of Re>Think Local’s sophomore year is to launch a major awareness campaign that promotes localism to the public at large, beyond the like-minded people who are already involved. The goal is to encourage citizens, business owners and nonprofits to shift a larger percentage of their purchasing to local.

The first component of its “Go Local Hudson Valley” campaign is an Indie Impact Study, the first of its kind in the Hudson Valley. Independent retailers, manufacturers and growers with storefront operations (brick-and-mortar presence) are invited to participate in a survey from which the results compare the economic multiplier effect of spending at local independents with that of major corporate chains. Organized in partnership with the American Booksellers Association and research firm Civic Economics, the study should help make the case to consumers that their money goes farther if it stays local.

The deadline to complete the survey is Nov. 27, soon after which Re>Think Local will promote the results. Business owners who are interested in participating should contact Kelleigh McKenzie at 845-790-8110.

Tickets to the 1st Anniversary Celebration on Nov. 12 are available at rethinklocal.org/events/falcon. Questions can be emailed to [email protected] or call 845-790-8110.