‘The talent in this town is mind-blowing, and deserves more forums’

Like so many in this nook of the woods, Pete Smith is a man with a past: a comedic past. Not that his life story is so very ha-ha-ha, but this gregarious healthcare administrator slash Haldane dad slash sometime-scribe for this very media identity had another calling — that of stand-up comedian, a form he is returning to as he presents Philipstown’s first (we think) Variety Show, coming to Main Street’s The Living Room at 8 p.m. on Saturday, Nov. 16.

Pete Smith
(Photo by A. Rooney)

Smith is eager to share that stage with other denizens of this area whose talents lie in any number of areas. The evening’s lineup includes singer-songwriter duo, the very newly-married Rick and Michele Gedney, who perform as Open Book; sitar player John Dube, who’ll be joined by Steve Franchino on flute, playing “Indian-inspired” music; teen stars of last summer’s Depot Theatre smash The Drowsy Chaperone, Harper Levy and Tyler Mell, who will perform a number from that show and another from The Pajama Game, which they also appeared in along with comedienne Shelly Colman, direct from ‘the city’  and Smith himself. Mell will double as emcee.

“This area is so rich in talent,” says Smith, “and it seems to lend itself to a variety show.” Smith has always had a real fondness for that format. “When I was younger, I watched it on TV — the mix of comedy, music and dance went nicely on the palate. In terms of mainstream culture, it has gone out of favor. Some comedians voice disdain for sharing the stage with music; I’m shocked by that,” Smith says.

As a child growing up in Connecticut, Smith recalls being “the kind of funny that if the circumstances were right I could flip a moment on its head — I had my moments here and there. I was acutely familiar with teenage angst, which is as informative in dealing with comedy as anything.” 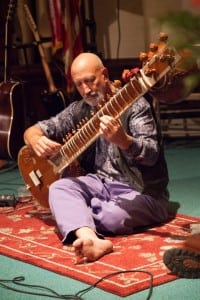 John Dube with his sitar
(Image courtesy of Dube)

Heading to the Big Apple before his 18th birthday, he bypassed formal education and “did the starving artist thing: worked at the Waldorf as a bus boy, drove a cab, and had some breakthrough moments in comedy, earning paychecks, riding the wave of club and performance spaces in the city.” But, at 25, he walked away from it all, with “an inkling that there were other pieces of my life to be explored.”

He returned to Connecticut, got a “straight day-job in healthcare” and eventually relocated, with his wife Sally, to San Francisco, where in his early 30s, after becoming a father (to Clayton, now a senior at Haldane), he migrated to improv, working as a founding member of the troupe Club Solo, after determining that life on the road doing improv didn’t mesh well with fatherhood. The improv work evolved into solo performance work.

Three years ago the Smiths returned to the East Coast, settling in Cold Spring and that performing itch began anew. Smith started going to open mics in the city. Asked if his comedy could be categorized in any particular way, Smith furrowed his brow and gave it a thought before describing it as having “probably an element of absurdism in it — quirky enough to be kind of like a novelty in comparison to mainstream stand-up. One of my favorite approaches is to assume the mind of a child.” 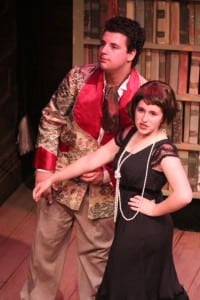 Tyler Mell and Harper Levy will give an encore performance of a number from The Drowsy Chaperone. (Photo by Katie Bissinger)

In choosing Haldane senior Tyler Mell as emcee, Smith said that many comedians nowadays tend to be “cynical, edgy and ironic. I’ve never appreciated those qualities in an emcee, and Tyler isn’t any of those things. He has an ‘invitingness’ about him.”

Smith calls The Living Room a perfect venue for this first outing. “It’s not that big, and in fact small is a big factor; it’s manageable. It’s my preference to work on small-scale stuff, moments which allow accessibility and a bond between the audience and the performers.  Small is integral.”

The eclectic lineup allows for things specific to the variety night genre: discovery, and an overall “element of faith,” says Smith. “It’s actually great if there are imperfections. Minor flaws add to the sense of intimacy.” If it all works out, Smith intends to do more. “The talent in this town is mind-blowing,” he says. “The youth talent alone enriches the cultural life in this town so much. That talent deserves forums and the more forums the better.”

The Living Room is located at 103 Main St., Cold Spring. The cost, as described on the event poster, is “pass-the-hat.” Visit facebook.com/lesserstage.