Botany for Gardeners by Brian Capon – my copy is a third edition – has become an aspirational book, sitting on my nightstand for a year and yet I’ve only advanced my bookmark to about a third of the way. Although I find the material fascinating, it’s just a little over my head, a book that I’d love to read as part of a class, with discussion and progression of the group learning process to facilitate my understanding. Not my tired old brain struggling to remember it all after a long day of things that have nothing to do with botany. 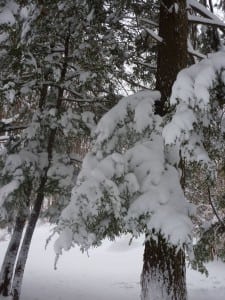 It would be good for plants and trees if we see snow-covered branches this winter.

Now that we’ve hit the below freezing mark for a couple of nights in a row, I’m thinking about dormancy and opened Botany for Gardeners again. The trees and plants I’ve tended through summer and fall have all shut down or been cut back by me or the deer that scavenge my yard. Shutting down for the season seems like a good idea. It’s cold, it’s dark, and the days are short. Dormant states apply to plant growth in many stages. Seeds remain dormant until stimulated by the optimal conditions for growth – heat, sunlight, warmth, water, and food from soil. A sign of their hardiness, many seeds can lie around on top of the soil for years.

Trees, biennial and perennial plants go into a dormant state and stop growing to hold their energy in check to cope with the adverse conditions of the season. Light, water, and temperature signal them to stop and then start growing again. Everything in the natural world in our area changes its behavior seasonally. Birds migrate, animals hibernate, and the landscape goes gray and stark against the winter sky. Dormancy, behavior changes, suddenly it’s dark at 5:30 p.m. and all we have to look forward to is less daylight for the next two months until we start to get a couple more minutes each day. We’re the only ones that soldier on, spending more time indoors and closing down the barbecue grill, but going about our business as usual.

In the desert, plants go dormant to escape heat, not cold, but the same traits govern its instincts as the off switch of our native plants in Philipstown that’s triggered by cold. Coping with adversity is the guiding principle. These behaviors are being altered, though. Among other things, climate change has impacted the life cycles of plants in our landscape. 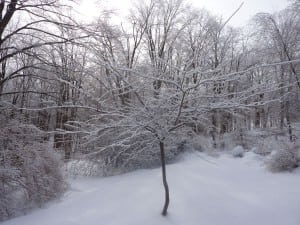 A fruit tree in a snow-covered landscape.

Data from the University of New Hampshire show that northeast winters are 4.4 degrees warmer over the period from 1970-2002 and this is warmer than the average annual temperatures for our region, which average about two degrees warmer for a 100-year period.

Although this doesn’t sound very drastic, necessarily, consider that when it’s the difference between 29 degrees and 33 degrees, it means that the temperature is more often above freezing. It means that in New York, we have fewer days of snow cover and milder winters with less ice. This affects soil temperature and microbial activity, as well as causes a freeze and thaw cycle for plants that heaves up the soil and roots, exposing the plants to damage. All that snow acts as a protective blanket for the soil and plants.

Over the past 30 years, bud break in the spring for apples has been documented an average of eight days earlier. An altered cycle of less sleep essentially has effects that are being studied, but aren’t completely understood yet. The landscape will tell us, though, trees and plants that thrived in our hardiness zone won’t continue to thrive. Just like we’ve experienced extreme weather patterns in the summer like extended heat waves, we’ve had similar shifts in winter storms and that trend is going to continue.

For optimal growth, a plant needs sufficient rest and cold temperatures to cue its system. Back to the apple, according to Botany for Gardeners, apples need a minimum of 1,000 and a maximum of 1,400 hours at 45 degree temperatures and below for their buds to develop. In the apple’s reproductive system, the buds will become the flowers that will become the apples, which contain the seeds to make more apple trees. For its survival and future generations, the apple needs winter temperatures. Here’s hoping for a good harvest of apples next fall.