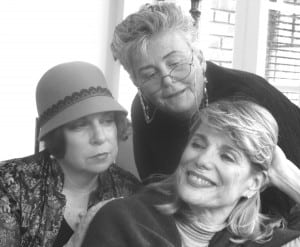 Dottie, Kate and Mae: Between the Sheets. An Intimate Look at Three Dames (Photo courtesy of Brick Town Theatre)

Kelly Ellenwood, a Broadway veteran and musical performing artist and songwriter, will bring to life one of Parker’s many soliloquies, Just A Little One, along with a handful of sardonic humorist’s poetry, and songs from the era including one with lyrics penned by Parker.

Adding playwright to her long list of accomplishments on and off Broadway, powerhouse actor/singer Nancy Johnston has written an original one–act portrayal of actress Katharine Hepburn.

Rounding out the triple bill, company members Stephanie Hepburn and Nancy Larsen will recreate a Chase and Sanborn Radio Hour interview with Mae West. Both women are seasoned actors who have performed widely across the U.S. and abroad, on stage and screen.