One of those children who always knew his calling, illustrator and painter Tristan Elwell followed a trajectory taking him from art classes as a child to New York City’s High School of Music and Art to higher education, majoring in illustration at the School of Visual Arts (SVA) and a lifelong career as an artist. Elwell’s paintings, many of which serve as book cover illustrations, are currently the subject of an exhibit at the Butterfield Library. The exhibit, on display through Nov. 22, showcases Elwell’s work in his favorite genre, fantasy.

Tristan Elwell, pictured in front of two of his illustrations now on display at Butterfield Library.  (Photo by A. Rooney)

Elwell, who works from a home studio in Cold Spring, moving here with his family in 2001, says he “knew basically what I was getting into early on.” He obtained work immediately after graduating from SVA and started doing book cover work a year or two after that, with initial assignments largely falling into the ‘cozy mysteries’ category, or “nice scenes with skulls, blood droplets, that sort of thing,” he says.

Over the years Elwell branched out into other areas, including juvenile fiction and fantasy. “I always had an interest in fantasy, as obviously it’s more interesting to paint things that don’t actually exist,” he notes, adding, “it’s also a section of publishing which has remained healthy, and illustrated covers are still a selling point. There’s still a large editorial market; publishing is still relatively healthy.” He has done book covers for all the major publishing houses, including Avon, Bantam, HarperCollins, Penguin, Pocket Books and Scholastic. 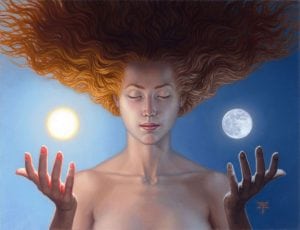 Night and Day, a personal work

In an ideal situation, Elwell likes to read a full manuscript before creating his cover, and enjoys working with editors and art directors.  This is not always possible, however, as sometimes books have not yet been completed and cover art is often one of the earliest pieces in the process because it is used for promotion.

How then, to conceptualize and give visual life to a fantastical beast or situation? “Sometimes I get a very specific description,” he says. “Other times it’s more vague. I prefer to have a manuscript because an editor isn’t necessarily reading a book with the same sort of viewpoint as an illustrator might be. You’re performing two different jobs with illustration: one — the most important — is to sell the book, making the cover engaging enough so that someone will pick the book up and read the jacket copy; two, to be true to the author and give satisfaction to the readers; sometimes this is a balancing act.” 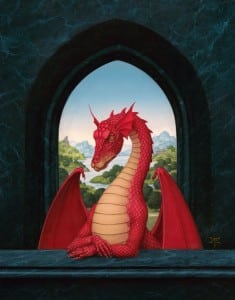 The cover illustration for Tooth and Claw, by Jo Walton

Pointing to one of his works as an example, Elwell describes a key plot element: “There’s a girl, disguising herself as a boy. I have to show the main character, make her androgynous, but make it not obvious to people looking at the picture so that I’m not spoiling major plot points.” In keeping with this, generally Elwell does not choose imagery from the last quarter of a book to highlight, “though it can keep the readers going,” he says.

Elwell enjoys the “collaborative process of working with art directors and clients — some people can’t, and those people aren’t happy being illustrators. I’ve had few instances where an art director hasn’t made the picture better. It’s particularly useful in the early, sketching, stages. Sometimes it’s easier to respond to something that’s already there and use a dialogue between two people to make it stronger. I’ll usually present several different initial rough sketches. Sometimes the client chooses one or they’ll see something that then gets developed into something different.”

Elwell has worked on book series, and that can go either way. “If you have a series with a publisher they’ll often keep the same creative team as long as it’s selling; there are definitely illustrators associated with particular series, but it’s a fickle industry and sometimes there is repackaging.” 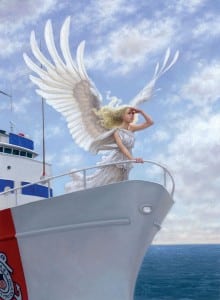 An illustration for Angels on Earth magazine.

In addition to producing his own work, Elwell also teaches painting and illustration at his alma mater, SVA. Many of his students find employment in the gaming or special effects industries in conceptual design. Elwell sees the largely anonymous function that many of these jobs embody as “a disadvantage, as their work isn’t seen directly in the end product; but advantageous in that it’s a whole field that’s opened up a large market segment and that’s good because other sectors have shrunk.”

Elwell, who has exhibited work in group shows in New York and California, says that “the wall between illustration and gallery work has come down. The fine art world is much more receptive to narrative imagery. There are many who study illustration because it gives them a solid traditional foundation and narrative approach, who are making much of their living as fine artists.”

All works on display at Butterfield are oil paintings. Most were painted on illustration board, “which gives the work a nice smooth surface, which is good because the work is fairly small and detailed,” says Elwell. “I’ll start with a thin acrylic, under-painting to establish light and dark patterns and then I’ll finish the final layers in oil. Then, when completed, the work is scanned, cleaned up, color corrected and sent to the client as a file.” 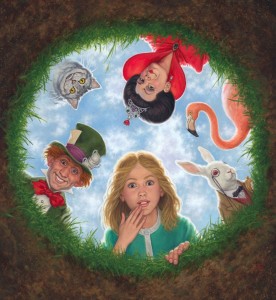 A poster illustration for the Opera Theatre of Saint Louis

Although the majority of the paintings were done for book covers, Elwell also paints for himself. “The personal work is important. When you’re an artist you get the sort of work that you show, so it’s important to produce work not done for clients, so you can grow your portfolio to get more work. It’s easy to fall into the trap of getting commissioned work which is not necessarily what you want to be doing, but you just keep getting it, so you just keep doing it.”

As the work Elwell does for himself is also largely in the fantasy genre, he notes the differences as having to do with time constraints. “Without outside deadlines I can work on something that doesn’t have to be finished before it is finished.”

Prints of the images on display are available for sale at Butterfield Library, with a percentage of profits donated to the library. Visit tristanelwell.com.

All illustration images are copyright and courtesy Tristan Elwell.