Two years ago, Garrison’s Phil Geoffrey Bond imported his revue, Sondheim Unplugged, to the Depot Theatre, under the banner of Cabaret In The Country. An evening-long combination of anecdotes and songs, hosted by Bond, the first go-round sold out and now returns, on Saturday, Nov. 23, in a new edition, with a new twist: most of the singers are local professionals.

Sondheim Unplugged, which is currently in residence at Manhattan’s 54 Below club, where Bond is director of original programming, began life more than three years ago, when Bond, after attending one of the many celebrations of Stephen Sondheim’s 80th birthday in 2010, got the notion of boiling everything down to the lyrics, unadorned.

Then director of programming at the Laurie Beechman Theater, he tapped into the vast network of singers with whom he had worked and put together a program where insider anecdotes stitch together an evening of song with an emphasis on the lyrics. A hit from the start, new editions are presented at 54 Below regularly, celebrating the life’s work of one of the masters of American musical theater.

At any given Sondheim Unplugged, audiences can expect to hear music from the composer’s most beloved works from the stage, film and television, including A Little Night Music, Into the Woods, Sunday in the Park with George, A Funny Thing Happened on the Way to the Forum, Pacific Overtures, Sweeney Todd, Follies, Passion and many more, all accompanied by piano only. “For this edition we currently have a crazy song list of 20 songs,” says Bond, who chooses them. 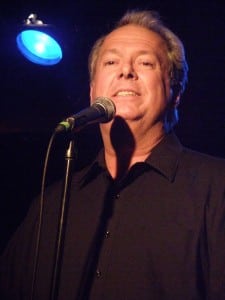 Eric Michael Gillett, who will be making a return appearance at Sondheim Unplugged.

Generally he goes to cast members, asks them to provide him with a list — “that’s how you get them to be at their best,” he says — from which he chooses and suggests and fine-tunes. “If someone has something, for example, from Into The Woods I then try to get two or three from that show, not just one, as I would then have to talk about a long list of shows, and I can’t cover each of them.”

Sometimes Bond asks people to learn a song, perhaps one they know but haven’t yet tackled. “I challenge them,” says Bond, adding, “sometimes they’re reticent.” Some of the material comes from Sondheim’s best-known works, while others can be more obscure, things like songs from Singing Out Loud, a never-produced original film musical with a score by Sondheim.

Working with one of two very experienced-in-Sondheim musical directors, Joshua Stephen Kartes in this instance, there is scant time for rehearsal, just one, earlier on the day of the performance. The musical directors “have to have the unique talent of getting into the head of Sondheim,” Bond explains. “They need to be familiar with the canon. Both of these musical directors (the other is Joe Goodrich) can just about play any Sondheim song without looking at the music and can change keys. I get the set list to them about a week before the show and then we rehearse on the day. It’s a collaboration. Both of my musical directors are vocal coaches as well and can, for example, help with reaching a note.”

Bond, the musical director and the performer work together, generally starting with the tempo used in the recording, and taking it from there.

When tailoring songs to performers, Bond sometimes enjoys going against type, while at other times he matches temperament to character, who best to say, portray Cinderella in Into The Woods or Mrs. Lovett in Sweeney Todd or Anne in A Little Night Music in song. In the city he has a staple cast of about 15 performers into which he is always introducing new singers. 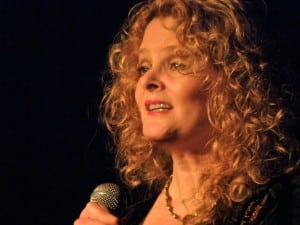 For this show, two of those regulars will return to Philipstown for this second edition. Sarah Rice, the original Johanna in Sweeney Todd, and Eric Michael Gillett, who has appeared on Broadway in Sweet Smell of Success, Kiss Me Kate, and The Frogs both performed on the small stage in 2011.

Rice is looking forward to her return to the Depot, noting: “The fun thing about performing at the Depot Theatre in Garrison is the sense of history and intimacy. A perfect little theater. The audiences are warm and welcoming and a pleasure to sing for. The last time we sang a Sondheim show at the Depot, someone brought home-baked brownies! I love the train ride getting to the theater from New York City — the best view ever!”

For those unfamiliar with Sondheim, Bond urges them to dip in: “No one writes music like Sondheim; he’s up there with Aeschylus, Euripides, Shakespeare. He has such a unique voice about such an array of themes. He’s lionized, but also hysterical, and we’re going to do a lot of the funny songs on the 23rd.”