Middle School is a time of transition, of figuring out who you are, of comparing and defining yourself in relationships with peers. Haldane’s social-emotional learning (SEL) curriculum, Second Step, helps middle schoolers navigate this landscape by giving them tools to talk more openly about the complex social world they live in. Haldane’s Learning Differences Committee (LDC), a PTA group of parents dedicated to spreading awareness and acceptance of all children who learn differently, especially the most diverse learners, is a strong supporter of SEL programs. 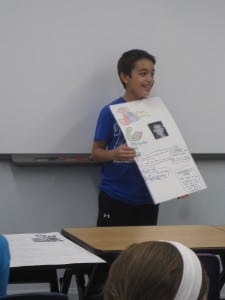 Sixth grader Luke Hammond presents a poster about Jim Carrey who has ADHD.
Photo courtesy of the Hammond family

The sixth grade Second Step curriculum covers several social-emotional concepts including empathy, awareness of assumptions and perceptions, bullying, and moving from bystander to ally. Empathy was a central, recurrent theme for the month and for the project. When students understand and embrace who they are, they are better able to embrace and accept others.

Sixth grade students and teachers were first given an opportunity to learn more about themselves. They completed the VAK Learning Styles Self-Assessment to determine how they learn best: were they visual, auditory, or kinesthetic/tactile learners?

Next, students and teachers completed The Multiple Intelligences Checklist describing different categories of intelligence: linguistic, logical-mathematical, spatial, bodily-kinesthetic, musical, interpersonal, intrapersonal, and naturalist. Students were given reading materials about which intelligence and learning style fit them best, discovering that sometimes they were tied in multiple categories. Everyone shared results with great enthusiasm.

After discovering how diverse learning styles are within a typical Haldane classroom, students were each assigned to research one famous person who had a more specific learning difference. They were asked to create a poster to tell a little about the person, identify the learning difference that person had, and share what contributions that person made to society.

Students received a list describing some common learning differences such as dyslexia, dyscalculia, dysgraphia, ADHD, and autism. The children also learned that some people need specialized interventions in school to address their learning differences. An emphasis was placed on how individuals can be differently-abled rather than disabled, and the concept of neurodiversity was introduced.

Liam Marrinan, a sixth grade student said, “Ironically, I got an author who has dyslexia. How can that be?”

His comment prompted a discussion about how people compensate and use accommodations to overcome areas of difficulty. The children were surprised to learn that there are several current and historical authors who struggled with dyslexia. The class was then able to explore where stories originate.

Someone who has difficulty reading may have exceptional emotional, observational, and/or oratory skills – all necessary in creating and telling a story. Technology and help from others can also assist with the mechanics of writing and editing. Students learned that a collaboration of different kinds of learners/thinkers often results in valuable and creative endeavors.

Speaking for the teaching team, Kim McCollum said, “I think this may be one of the most aware groups of sixth graders we have had due to the learning differences project and positive discussion it has generated. We are very pleased with its outcome.”

In all, students created 60 hand-made posters of well-known people in history, media, arts, science, business, politics, etc., who all overcame specific learning differences and did great things with their lives. Some of those included were Woodrow Wilson, Agatha Christie, Babe Ruth, Albert Einstein, Avi, and David Toth. Quite a diverse group. Students also had an opportunity to watch the award-winning 2010 film Temple Grandin, which chronicles both the famous autistic author-activist’s early struggles in school and later achievements in life. 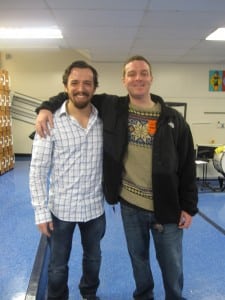 The project culminated in both sixth and seventh graders attending an assembly presented by Think Different Diplomat Travis Sauerbrey who talked about his own personal experiences and struggles being diagnosed with dyslexia, dyscalculia, and ADHD in school.

Sauerbrey came to Haldane from the Eye to Eye Speaker’s Bureau, a national program that brings college students with learning disabilities into schools across the country in order to put a face to difference and encourage kids to explore the diverse ways in which all people learn, think, and enrich one another’s lives. Haldane students asked the speaker insightful questions, sparking thoughtful discussion about what it means to be a different kind of thinker.

LDC hopes the take-home message for students is a lesson worth sharing with all ages: that by viewing disabilities as “different abilities,” we challenge our cultural understanding of diversity to also include brain-based “neurodiversity.”