Probably as many distinctive ideas as attendees – 125 – filled the room at a Hudson Highlands Fjord Trail forum Wednesday night, but consensus on key points emerged, especially on the merits of letting the proposed path hug the river as much as possible.

On the eve of the latest major snowstorm, the event at the Chalet on the Hudson north of Cold Spring drew not only residents of the village and other parts of Philipstown, plus elsewhere in Putnam County, Beacon, and southern Dutchess County, but environmental leaders and government officials, among them the whole Philipstown Town Board, Cold Spring Trustee Stephanie Hawkins, Beacon Mayor Randy Casale, Putnam County Legislator Barbara Scuccimarra, and representatives of the New York State park system. 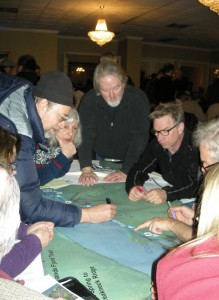 Participants exchange ideas and annotate one of the maps of the section of fjord trail from Cold Spring to Breakneck Ridge. Photo by L.S. Armstrong

The agenda involved overviews of the proposed bike-hike path, intended to run between the Cold Spring and Beacon Metro-North train stations, followed by swapping of views on its preferred alignment and other nitty-gritty details of “trail-blazing.” A tableful of attendees living along the proposed route also injected cautionary notes about respecting private property rights in creation of the trail, which advocates believe could become a significant visitor lure and boost the Highlands economy.

As the program got underway, Steve Rosenberg, Scenic Hudson’s senior vice president, shared a bit of good news: Scenic Hudson is providing $100,000, which he said he hopes “can be a catalyst … leverage other support” for the trail. The organization also has devoted staff time to the trail effort.

Philipstown resident Andrew Chmar, executive director of the Hudson Highlands Land Trust, similarly announced that the HHLT will continue to lend manpower and financial assistance. “Our organization is really excited about this” and committed to offering “whatever it takes … to make this happen,” he said. Chmar summarized some of the funding arrangements to date. “We’ve got land trust monies, plus the commitment of a major donor for this planning exercise to the tune of $139, 000,” he stated.

Moreover, “we have another $450,000 pledge for the consolidated funding application process,” a state funding mechanism, “of which the state recently awarded $100,000 for this project.  So we have a $100,000 match right now for that $100,000 [state grant] with another $350,000 committed if this project receives further funding from the state.”

Assemblywoman Sandy Galef outlined her pursuit of financial backing through Metro-North channels as well as the likelihood of assistance from the state Department of Transportation. “Your state dollars are coming back home,” she said.

Deputy Putnam County Executive Bruce Walker said officials in Carmel also are seeking funding and “are very excited” about the trail. You have the county’s support,” he said.

Chris Lucas, from The RBA Group, the consulting firm helping develop a trail master plan, sought advice from attendees — the main purpose of the evening. “We want to hear from you what you know that can help us” define the route and make the concept work, he said. He pointed to the large maps topping the tables around which participants gathered. Each map depicted one piece of the trail — such as the stretch from Cold Spring to Breakneck Ridge. “Tonight is about getting all the possibilities onto these maps,” to get input and “ensure that we’ve looked at all the options from the start,” Lucas explained.

Then the real work began. Surrounding the map, table after table the attendees broached, discussed, and methodically jotted down suggestions and wishes, scribbling on the maps as they went along. 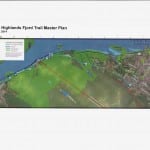 When each table subsequently read off its list to the reconvened gathering, certain items came up repeatedly. A clear favorite was — wherever possible — running the trail along the Hudson shoreline, perhaps using a boardwalk above the water in places, as opposed to siting it right next to Route 9D, a busy and hazardous state highway. Other top goals were getting more — and safer — parking along 9D; protecting pedestrians by reducing the 9D speed limit, since a portion is posted at 55 miles per hour, despite the 40 mile-per-hour maximum elsewhere; and utilization of the Cold Spring trolley or other shuttle to ferry pedestrians to the trail and peripheral hiking paths above Route 9D. Other ideas included:

On a night marked by enthusiasm and optimism, the only potentially negative note came from a group of homeowners along 9D. Their table provided not only a few recommendations, such as installation of metered parking at 9D trail lots, but several admonitions — that pollutants in the river could make a boardwalk hazardous; that some elements of the project will prove totally unfeasible; and that some of the land between the river and 9D is private, including parcels extending into the river. “We all want this to happen” and to work together with trail proponents, one man said. “But this is private property. A lot of where you want to build it is private property. It’s our property.”