Planning Board votes for a SEQR ‘neg dec’

The Butterfield development concept plan for the old hospital site on Route 9D in Cold Spring cleared the first of the regulatory hurdles last Wednesday night (Feb. 19). The Cold Spring Planning Board gave the project a clean bill of health by making a negative declaration as to its potential environmental impact in compliance with the State Environmental Quality Review (SEQR) law.

The plan for the Butterfield development contemplates a 15,000 square foot office/retail building just off 9D, a 17,500 square foot office/retail space and 55 market rate condominium units contained within three buildings and three single family homes along Paulding Avenue. The current Lahey pavilion would remain as a location for medical services.

The board findings dealt with air, water and land quality, impact on historic buildings, endangered species, traffic and village infrastructure. The board also concluded that the development “is projected to result in a net tax benefit to the Village of Cold Spring, the Haldane School District, Town of Philipstown and Putnam County.”

The Planning Board did not accept the originally submitted EAF after a review by the board’s professional consultant Chuck Voss found it lacking in details and justification for its claims. Voss subsequently altered his view and over the last few meetings praised the developer’s team for their cooperation and the completeness of the information subsequently supplied. He repeatedly pointed to the application binder and noted the increased number of pages as visible proof of a successful review process. Planning Board members did not disagree with that assessment.

Although the Planning Board decided not to a hold a formal public hearing (SEQR does not require one) public comment was permitted at the end of most if not all of the board meetings. Little comment was made over the months other than by some senior citizens and a few present and former local officials mostly expressing appreciation of the board’s work and urging members to keep moving toward approval. While significant objection or critique of aspects of the developer’s concept plan may still exist, there was no sign of it during this round of review.

Guillaro’s lawyer, Steven Barshov, has made a point of underscoring the absence of people raising red flags on the environmental impact of the project at several meetings, no doubt to establish a clear record for any future arguments either procedural or legal.

The Planning Board operated as the lead agency (representing all interested agencies local, county and state) for the SEQR review. Its deliberations so far constituted a review as required by the developer’s application and also for the upcoming Village Board consideration of the needed B4 to B4a zoning change for the hospital site so the project conforms with Village Code. The appropriateness of using one SEQR review for both purposes was argued among Village and Planning Board members and other observers last spring. The Village Board ultimately concluded in June that the Planning Board should proceed as lead agency. 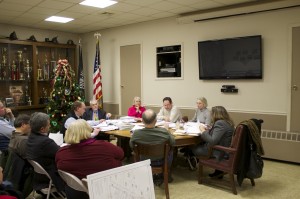 The Cold Spring Planning Board in session at Cold Spring Firehouse on Feb. 12 (photo by K.E. Foley)

Essentially the opposition argument then was that the village was taking too much of a risk in making a zoning change permitting the project to go forward without sufficient assurance that many of the proffered amenities (senior citizen center, post office, consolidated government offices) would actually exist once construction was complete. Whether many people still share this skeptical perspective remains to be seen.

In the past developer Guillaro has shied away from making any commitment about what services government or other tenants in his proposed buildings might provide in their spaces.  In March 2013 he told assembled senior citizens that he was not in the business of providing services and said his contribution to a senior center would be a “plain vanilla box,” meaning just the raw space. However, he now claims that the project will see several ostensibly desirable outcomes.

On a new web site and in paid advertising (including in this newspaper) the developer asserts, among other things, that building Butterfield will see a new post office, a public senior citizen/community center, county offices providing new services and space devoted to consolidated court offices.

County Executive MaryEllen Odell in September wrote a letter to the county legislature expressing her intention to pursue 5,000 square feet of space in the Butterfield development to provide services, including for seniors. The legislature has not committed itself to Odell’s vision although it would be premature given construction has not begun. Odell also referenced a commitment from Roger and Beth Ailes to contribute $500,000 toward a senior center. The Ailes family has not said publicly where their funds will go, if anywhere. Odell is running for re-election this year.

Town Supervisor Richard Shea also said publicly and in correspondence in the past that there is great interest by town officials in consolidating services and creating a senior center at the Butterfield site.

Doubtless some people will ask anew how citizens can be assured of these results and what enterprises will be permitted in the buildings if these services do not materialize.

If the Village Board approves the zoning change the proposed project will also have to go before the Historic District Review Board for review of the design of the buildings and other aspects in relation to the strictures of the district.

Far more complicated will be the volunteer Planning Board’s site plan review, which will involve painstaking, at times mind-numbing analysis of the myriad details involved in a project of this dimension.

Aside from Molloy, the chair, Planning Board members include Anne Impellizzeri, Arne Saari, Karn Dunn and James Pergamo.