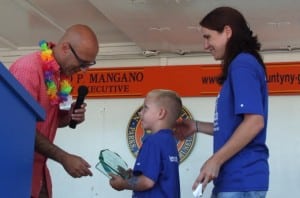 Connor Looby knows what it’s like to be born with a rare lymphatic disease. But the 7-year-old hasn’t allowed the disease to slow him down despite spending time in and out of hospitals during much of his young life.

Last year Connor decided he could pitch in to help others, and organized a successful obstacle course event in Tuxedo, N.Y., to raise awareness and funds. For his efforts, Connor was awarded with the McKenna Shea Johnson Youth Ambassador Award.

In an effort to build on Connor’s fundraising efforts in the region, an evening of entertainment to benefit the Lymphatic Education & Research Network will be held Friday, March 7. The event takes place from 7 to 11 p.m. at Putnam County Golf Course, 187 Hill St., Mahopac.