“The human spirit” is the encompassing theme of The Beacon Theatre’s fourth annual Freeze Frame Film Festival. Not to be confused with the Beacon Independent Film Festival, held here in the fall, the event kicks off at 445 Main St., Friday, March 7, and will screen 10 films, including shorts and documentaries, over three days. 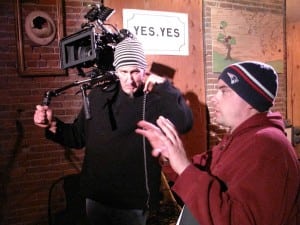 A second criterion that festival directors Kim Elizabeth and Liz Paradise applied to their selections is a relevancy to the Hudson Valley. In The Night Sky, a documentary by Felix and Sarah Olivieri that examines UFO sightings in this area, was filmed in Columbia, Orange, Ulster, Putnam and Dutchess counties. Jack Kyser used the Beacon Theatre as the location for his short film, Jake the Cinephile. Paradise, who lives in Rhinebeck, directed a feature in the festival titled McDougal’s, a “mockumentary” about a failing fast food chain.

“Both Liz and I have been affiliated with Freeze Frame since it began,” Elizabeth said. “We always try to focus on what is topical, relevant and interesting to our Hudson Valley audiences, while remaining a venue that is true to the artist — a place where their truth can be told.” 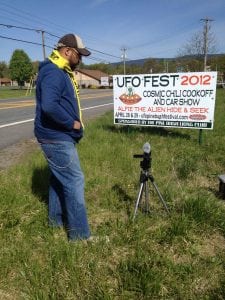 On further defining the common thread in the films this year, she continued, “It’s the ever-compelling, curious bits and pieces that make us who we are.”

The Olivieris logged more than 3,000 miles across the Hudson Valley while making In The Night Sky, beginning at the Pine Bush UFO Festival. “Local author Linda Zimmermann helped us get the word out to people with UFO experiences, and we were flooded with responses. There are no clichéd reenactments in our film. It’s about people and how their lives were changed.”

Of the 40 interviews the filmmakers documented, 12 made the final cut. They are working on a comic book about the three best alien abduction stories, the artwork for which will be on display at the festival.

Two films directed by Brooklyn resident Theodore Collatos will be shown twice on Saturday, March 8: Move, a feature documentary about Chicago’s Deeply Rooted Dance Theater (11:30 a.m. and 5 p.m.), and Dipso, a feature about an ex-convict pursuing a career as a stand-up comic (1 p.m. and 8 p.m.). Q-and-As with the director will follow the evening screenings.

Additional films include: Harry Grows Up, a short film by Mark Nickelsburg; Euphonia, by Danny Madden; and Southpaw, by Bryan Schlam.

A complete Freeze Frame schedule is available at thebeacontheatre.org. Single movie passes and day passes can be purchased online.