Still a seedling as it approaches its first birthday, Hudson Valley Seed (HVS), a nonprofit founded by Garrison’s Ava Bynum, has thrived and grown tremendously since its inception. With a mission to “establish educational gardens with a nature-based curriculum in Hudson Valley schools,” it has done just that in three schools, with two more set to begin in spring and potentially more in fall, plus a waitlist of nine strong eager to implement HVS’ combination of hands-on gardening and unique, guided curriculum that dovetails with Common Core–mandated standards in science, math, English, art and more. 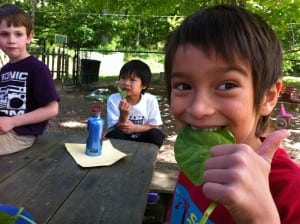 Bynum’s work began at the Garden Road School in Peekskill, where she was hired as an “inside/outside” teacher and asked to start a garden. She came to understand how “aligned both were and how each belonged in the other.” Bynum realized that “funding and time are obstacles” to teachers coming up with their own garden lesson plans, because “once teachers are done with what is now mandatory, so little time is left for anything else, and things are so easily relegated to afterschool activities and not integrated into the school day.”

Other impediments include the growing season, as “plants really grow when school isn’t in session. The solution is a four-season garden — one which produces food and serves as an instructional center.”

Factoring these elements, Bynum set about to take what she learned and apply this to a public school model. What she has come up with is structured with the requirement that each teacher who signs on is required to commit to one classroom hour each week, throughout the school year. Bynum has found that teachers have been “very much on board because it takes all of their skills and gives them an opportunity to apply them to a real-life situation.”

This first year, the program was offered to grades K–2, with schools able to utilize it in two or three of these grades. As part of the program, schools must commit that every year they will expand by one grade, so students will never advance and no longer have garden time.

A sample lesson, “seed sorting,” encompasses many disciplines: Children sort pumpkin seeds out and count them, then add seeds collected by the entire class together, thus learning higher addition levels. They progress to multiplication and division using storylines about feeding people and inviting them to a harvest festival.

“So, we bring theoretical math concepts down to a tangible level,” explained Bynum. “Then science is brought in by learning how to cultivate the seeds. They weigh them while wet, then when they are dry, learning about the concept of evaporation. English is brought in by using their powers of observation in comparing and contrasting — describing and recording what they’ve observed in their garden journals.”

“Non-regurgitation means retention,” Bynum said. It’s applicable to high school as well. “Pre-calc has so many fascinating problems,” said Bynum. “For example, in an examination of the parabola we look at low tunnels [where vegetables can be grown in cold weather] as parabolas, then calculate the focal point, where the light reflects through the plastic, where the concentration of heat is the highest.”

Bynum has developed the lessons from her experience, aided by shared information in the online community, though “often it’s more work to re-work it to your specific needs, and easier to create from scratch.” She continued, “I’ve learned not to walk in with any assumptions … For instance I told some boys to ‘Go rake’ and discovered them trying to shift leaves with the prongs in the up position. They had never used one before, and I hadn’t thought about that.”

She’s learned that a group mentality prevails — in a positive way. “If I just said, ‘Try kale’ — there would be resistance, but when a whole class has planted it and watched it grow and wonders what it will taste like together, it engages them in all sorts of hands-on ways and removes barriers,” Bynum said. “With kale, they enthusiastically ate kale and potato soup, and they will eat it again, at home.” While HVS’ focus is on the academic, Bynum sees it as an avenue to nutrition education and advocacy, a critical side benefit.

Now operating at Beacon’s South Avenue, Sargent and J.V. Forrestal schools, with 15 teachers working within those schools on the program, HVS will be working with Garrison School in the spring and with Glenham in either spring or fall. An expansion to Newburgh’s nine elementary schools is in the works. At Forrestal, in an effort funded by United Way, HVS works in collaboration with Hudson Valley Farm to School and Common Ground Farm to do a three-pronged program.

A different vegetable is highlighted every month, and Common Ground Farm visits first, followed by an HVS educator who works with that vegetable. Finally, there is a visit from a professional chef who highlights the vegetable in a meal. That dish is then cooked by Beacon’s food service director and served at all the schools. Approximately 2,100 kids vote, determining if they like it. If they do, it gets added to the rotating menu. “Winners” have included kale and potato soup, butternut squash macaroni and cheese, succotash and beet chocolate cake, while only pumpkin soup failed to find the support it needed to make the menu.

With all this activity in just the first year, HVS is operating at full capacity, and the challenge for Bynum going forward is on trying to figure out how to bring on more educators.

“Right now the program can’t expand because we need funding for more educators,” Bynum said. “We want to expand to meet demand but also want to document success and establish best practices so that we can scale successfully.”

Funding thus far for the nonprofit has come from a mix of foundation and individual support, and each school’s contribution varies by district. The Garrison Children’s Education Fund has helped support the program at Garrison School.

Working on development has been part of Bynum’s learning curve as a young executive director. She is grateful for the mentoring she has received from both Keeva Young-Wright, the president of Northern Westchester Hospital Foundation, “who has been instrumental in coaching me in development,” as well as the network of food and education professionals in the Hudson Valley. “It’s so rich, and several individuals have made their time and knowledge available to me to help me carry HVS’ mission through,” said Bynum.

It helps that the program is “designed to be scalable. The designs for the Hudson Valley can be applied to any Hudson Valley school. Already we have a proven success with an established model.” Right now the program is just beginning to measure its success quantitatively. Children are given a simple pre- and post-survey from which HVS analyzes what they are taking away from the program.

“We have lots of informal assessments now,” Bynum said, “and hope to have more structured data later in the year, too, both on academics and on healthy eating choices.”