No thanks for your service

Jerry Ensminger still has the look and the bark of the Marine Corps drill instructor (DI) he was when he retired after almost 25 years of service in 1994. As a DI, Master Sgt. Ensminger recited a pledge before taking charge of each new platoon of recruits, in which he promised, “to demand of them, and demonstrate by my own example, the highest standards of personal conduct, morality, and professional skill.”

Little did he know that within a decade of his retirement, he’d be testifying before Congress in a relentlessly waged campaign to get the Marine Corps to live up to its own endlessly professed high standards in its dedication and loyalty to the “Marine Corps family.” Nor did he ever imagine that he’d be the central figure in an award-winning documentary film about that campaign.

Semper Fi — Always Faithful, next up for Depot Docs at the Depot Theatre on Friday, April 11, with co-director Rachel Libert as special guest, was premiered at the Tribeca Film Festival in 2011, winning the award for Best Editing, and then being short-listed for Best Documentary for the 2012 Academy Awards.

The film, made with co-director and cinematographer Tony Hardmon, follows Ensminger as he attempts to find the truth behind his beloved 9-year-old daughter Janey’s harrowing death of acute lymphocytic leukemia in 1985. Ensminger was devastated. How could this have happened? There was no history of childhood cancers in either his wife’s or his family. Then, in 1997, he heard a news report that the water supply at Camp Lejeune, near Jacksonville, N.C., where the Ensminger family lived and where Janey was born, was contaminated with industrial toxins, some of them known carcinogens. 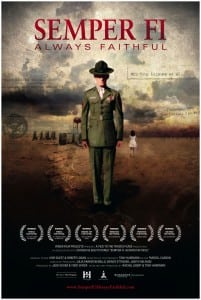 These toxins had been leaking into the water system, used by tens of thousands of people, both military and civilians, for bathing, cooking, and drinking, for at least 30 years. And while the contamination had been known to the Corps since the early 1980s, no effort had been made to publicize the health risks to those who had used and consumed the water, containing industrial solvents, engine fuels, benzene, and other toxins, with up to 3,400 times the levels permitted by safety standards, until 1999.

Most of this all-too-familiar story of human and institutional hubris, incompetence, and denial is told by and through Ensminger, who is a clear, impassioned, and compelling narrative voice. But there are other featured players, most prominently Mike Partain, born at Lejeune, now in his 40s, and suffering from a rare form of male breast cancer. Searching for his own answers to this unexplainable diagnosis, he sees Ensminger on CNN, testifying before Congress on the toxic water supply at Camp Lejeune. He begins working closely with Ensminger, and sets out to locate other men with male breast cancer.

He finds 78 of them, and they have only one other thing in common — Camp Lejeune; only four are in the Lejeune registry. We also meet Denita McCall, a former Marine who was stationed at Camp Lejeune in the early 1980s. She was diagnosed with parathyroid cancer, and became actively engaged in the effort to challenge the stonewalling and obfuscation and failure to be accountable and take responsibility at all levels, from the Marine Corps, to the Pentagon, to the Capitol.

This is perhaps the sorriest and yet most predictable moral of Semper Fi; that the default institutional and organizational reflex in American culture is what was called during my own time in the military ‘CYA — Cover Your Ass.’ As noted in the film, taking responsibility for the failure to ensure the safety of the water supply at Camp Lejeune, per the Navy’s own regulations, would have meant exposure to liability that would have certainly cost a great deal of money in court and health care costs, and could have ended or short-circuited a lot of careers.

Watching spokespeople for the Corps dodge and weave and play rope-a-dope to the efforts of anyone, whether it’s Ensminger and his fellow sufferers or the few interested members of Congress, attempting to get information or to get them to commit to doing something, one is left to wonder at the results of the annual Gallup poll asking people to rank their confidence in 16 American institutions. While Congress is predictably at the bottom, this past year with a 10 percent rating, the military is consistently at the top, with a 76 percent rating in 2012.

The triumph of hope over experience, one can only suppose. The year 2012 was when President Obama signed the Janey Ensminger Act into law, authorizing medical care to military and family members who resided at Camp Lejeune from 1957 to 1987; the measure applies to about 750,000 people. That triumph is not recorded in the film, but when the bill passed the House, Jerry Ensminger was there to savor the moment. “Through her short life and her death,” he said, “she’s probably caused more change than most people in their entire lives. It’s a great tribute to her.” Janey Ensminger would have been 36 years old.

Semper Fi – Always Faithful will be shown at the Philipstown Depot Theatre, Garrison’s Landing, at 7:30 p.m. Rachel Libert, co-producer and co-director, will be present for a post-screening Q-and-A and a Depot Docs reception. For more information call 845-424-3900 or go to philipstowndepottheatre.org. For tickets (recommended) go to brownpapertickets.com.