‘What is a painting? I try to push at that all the time.’

Donald Alter is 84 and still asks himself the question: “What is a painting?” Painting being an art form he has practiced for well over a half century in one form or another: literal, abstract, landscapes, portraits and now, on a Mac computer, something he learned just last year.

Ten of Alter’s more recent works will be shown in a new exhibit, Linear Continuum, which opens on First Friday, May 2, at Gallery 66 NY, with a reception from 6 to 9 p.m. Also shown will be two other exhibits, Obscure Spirits, works byGalelyn Williams,and In the Moment, works by Rosalind Shaffer. 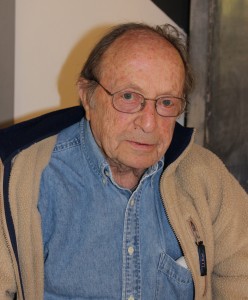 Donald Alter (Photo by A. Rooney)

As Gallery 66 director Barbara Galazzo notes: “Don is still working on his art. He’s working on a new series at his studio in Newburgh, a social commentary, and he’s also cataloguing all of the rest of his earlier work. He does everything — he has a wide range and he has learned and tried it all, and he always has a good sense of color. In this work there are very fine lines, which look as if they were done on a computer, but they are actually painted.

Alter calls the work in this show, done eight or nine years ago, “pivotal, because I’m always searching for new stuff. There are times when I discover things which lead me into new series — I work in series. This is work I keep reverting back to, since it’s the means of what I’ve been putting together since. What is a painting? I try to push at that all the time. What that embodies is always being investigated. This group of paintings is rather cosmic and deals with two dimensionality — what can be depicted on a two-dimensional surface.” In these works Alter is using medium acrylics on canvas and board.

In reference to the included work, Galazzo notes: “Painted over the past 15 years, the series is remarkably varied in both its subjects and execution. In Black Mountain #14, fastidiously executed geometric shapes form an unusual but pleasing alliance with sudden, bright splashes of color. Crosshatch Totem features a purple triangular rendering — a rigid mathematical form — crowned by a maze-like totemic swirl. The whole is framed within a finely drawn pattern of crosshatching.”

Alter spent his youthful years as an artist at the famed Black Mountain College, the experimental, highly influential liberal arts college and artistic community located near Asheville, N.C.; he studied there from 1948 to 1950. Galazzo’s program notes provide a description of Black Mountain College: “The new school operated on the premise that the study and practice of art were indispensable aspects of a truly liberal arts education, and it attracted and created maverick spirits. Although Black Mountain College lasted only 24 years, it quickly became legendary in the art world. 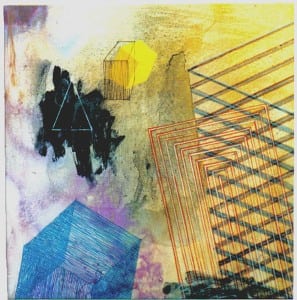 The heady atmosphere spawned such future luminaries as Willem de Kooning, Robert Rauschenberg, Ben Shahn, Cy Twombly, Merce Cunningham, Robert Motherwell, Arthur Penn, John Cage, Kenneth Noland and Donald Alter … Alter studied under the noted German artist Josef Albers. As Alter recalls, ‘It was all primarily painting, but I did everything that I could touch. I did sculpture, weaving, all kinds of crazy stuff.’ After he left Black Mountain in 1950, he never felt the urge to return to school, and believes to this day that ‘once you learn yellow and red make orange, you’re off and running.’”

After his time at Black Mountain, Alter was drafted into the Army and upon his return to civilian life began a successful career as a textile designer. He applied the Bauhaus influence to his graphic designs and textile printing.

“It was an important influence,” he says, “paying attention to a very broad patronage and the response of many people to your work.” He also taught textile design at Syracuse University: “They’d fly me up once a week for a couple of days then back I’d go to New York and the textile market,” he recalls. His work in textile design lasted from the mid-1950s through 1980, when he turned to fine art painting again — “That’s where my heart was,” says Alter. “During all the textile years I painted every single day — never put a brush down all that time.” 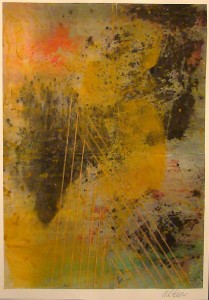 A painting by Don Alter

Alter’s latest output differs. “My new work is dealing directly from the computer,” he says, “imaging developed — painted — using the computer like it is a box of crayons. That’s another arena. These don’t exist unless they’re printed out … I came to use the computer because I was driven to it — I have to use it,” he says, “and as I use it, it opens up all kinds of avenues for visual expression. I’m aware that more and more art is generated on it and I’ve come to question whether or not paint is important. You work very much alone and it challenges me … But you know, painters paint for each other and my world is being surrounded by younger people all the time and I respect their contributions.”

Of the two other artists on exhibition, a press release notes:

“Williams’ work, a mix of found object sculpture and paintings done on old photographs, is executed in miniature and often with a darker palette. It depicts the interior landscape of dreams and emotions. Williams attended the San Francisco Academy of Art and studied under renowned sculptor David Ireland at the Capp Street Project, America’s first artist residency dedicated solely to installation art … In addition to her found object assemblage sculptures, Williams also takes old photographs and paints or draws fanciful and sometimes dark imagery over them, imagining a dream life or a different identity for the people in the pictures.

“Rosalind Shaffer creates sculpture with a meditative spirit, seeking balance and harmony in these turbulent times. Each ceramic figure in this exhibit is captured expressing an emotion in a moment in time. Her work is designed to be symbolic of that internal journey, quietly impacting the space around it engaging the viewer who comes very close.”