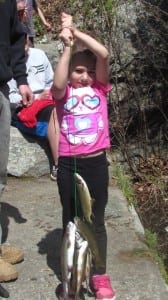 An annual rite of spring took place at the Cold Spring reservoir on Fishkill Road on Sunday (May 4) — Kids’ Fishing Day. It was the 26th year that the Nelsonville Fish and Fur Club organized and hosted the event. And there were plenty of fish to catch. The reservoir was stocked with 281 rainbow and brook trout just two days earlier.

The event is officially known as the Anthony Savastano Memorial Fishing Derby in honor of the event’s founder. His son, Mike Savastano, now spearheads the derby and also serves as president of the Fish and Fur Club. Savastano said that 92 kids took part this year, along with many parents.

While the day was all about the kids and the fish that they caught, there was also free food and drinks for everyone — thanks to about 20 local businesses that helped sponsor the event. “We couldn’t do it without that support,” Savastano said.

Prizes were awarded in numerous categories including most fish caught and largest fish caught and a raffle held at the end of the day helped ensure that everyone was a winner. “Pretty much every kid walks away with a fishing rod or other prize,” Savastano said.

The “big” winner for 2014 was 3-year-old Joshua Phillips who caught the biggest fish at the daylong derby — a 15 ½-inch rainbow trout.

According to Savastano, Nelsonville boasts the oldest hunting and fishing club in New York State — the local sportsmen’s group established in 1895.