Sitting behind his desk in a small office in the Beacon municipal building, Randy Casale beams out an ebullient smile.

“No one has it better than me as a mayor,” Casale said. “I always wanted to be mayor and now I am mayor of the hottest city from New York City to Albany on the Hudson River.”

According to Casale every day brings fresh ideas and proposals for new residential or commercial development. He can barely contain his excitement over the prospect of continued economic forward motion for the once long-suffering city. 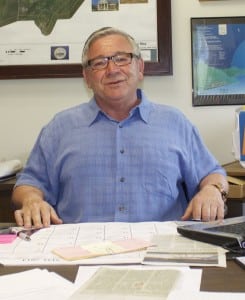 Just seven miles north along Route 9D in Dutchess County, Beacon looms large on the horizon of Philipstown’s downtown, Cold Spring village. Both locations are alive with the energy, visions and money of new local residents bringing a rich mix of urban talents (computing, communication, design, musical production) to their communities. And many of the new arrivals are entrepreneurs spurring business growth in a regional economy tilted toward visitors seeking to behold natural beauty as well as an eclectic mix of diversion and entertainment.

“We need to feed off each other to survive,” said Casale who said he looks forward to establishing a Cold Spring trolley and Beacon bus connection along 9D so visitors, especially hikers, can more easily experience both places without a car. He believes it will be done this summer. And he enthusiastically endorses the longer-term development of the Fjord Trail project, which will allow for walking and biking between the two destination communities. Beacon and Cold Spring art galleries have shared artists and shows in recent years.

Casale, 62, is in his third year of a four-year term as mayor, a part-time job he said he wanted since he was a child. He ran for the job after serving a couple of two-year terms as a Beacon City Council member. The mayor is a member of the council and has executive authority over the city administrator, contract negotiations and appointments to various boards. With a rising population of more than 15,000, Beacon has its own police department and a hybrid paid/volunteer fire service.

Beacon’s budget, like many other New York cities, is buffeted by struggles over union contract agreements, long-term pension obligations and the high costs of infrastructure upgrade.

Having served for many years in and as head of the city’s Highway Department, Casale has a practical “let’s get it done — we’re all in this together” attitude toward addressing issues. Although he ran as a Republican in a largely Democratic city he underscores that he is registered as an Independence Party member. He claims to eschew traditional party politics, including in making appointments within the government.

“The ruination of our government system is that no one wants to give the other party credit for doing something that’s right,” Casale said.

A believer in continued growth as a necessity for a communities’ lifeblood, particularly in cushioning the tax burden as costs rise for services, Casale ticks off plans and proposals in various stages that would bring hundreds of new housing units and several new commercial ventures. To assess and decide on new development Casale believes it is important for the city to hew closely to the established comprehensive plan — certainly a familiar theme in Cold Spring.

Surprising to a visitor, Beacon’s master plan and the attendant form-based, flexible zoning would permit heights of four stories on the north side of much of Main Street and three on the south side creating the potential for significantly greater density of population and businesses.

The possibility of new transit-oriented development, a mix of residential and commercial, right at the train station, controversial when first proposed a few years ago, is another large factor in Beacon’s future according to Casale.

Also of interest to Philipstown officials is Beacon’s receipt of over $4 million in annual sales tax revenue shared by Dutchess County. Casale points out, however, that as a city, unlike a town or village, Beacon has the right to pursue its own sales tax, giving it some leverage with the county. Putnam County has no sales tax sharing with local governments.

A lifelong resident, Casale is quite familiar with the social and political transition tensions between new and old residents, an issue well known to Cold Spring.

“My philosophy is old Beacon, new Beacon, it doesn’t matter, you’re here now. I wouldn’t be here if my father’s father didn’t move here from New York. You need an influx of new people to change ideas particularly when you’re stagnant,” he said.

Casale, reflecting on Beacon’s boom and bust past created by its once thriving industrial economy, worries that a tourism centered economy runs a similar risk. “What’s going on now is real good but we have everything in one basket again and I believe any good portfolio is divided up.” He thinks there is consensus about the need for a greater mix of businesses but no real agreement on how the city can manage toward that goal.

The mayor sees increased regional farming as one potential job creator. He readily acknowledges that the city cannot directly influence farm initiatives but believes through education students can be taught the value of pursuing work careers in farming as well as other trades. He is among those who argue that the nation’s schools overemphasize pursuit of a college degree to the detriment of skills-based learning, which would benefit many students in preparing for work and creating businesses in a local economy.

One significant shared challenge between Beacon and Cold Spring is aging infrastructure such as sewer and water pipes, water treatment and roadways. Casale said even the planning expenses for such capital intense projects are prohibitive. He hopes Congress will heed President Obama’s call for increased federal infrastructure spending which he said would also create a lot of local jobs.