At her forum on government tax-cutting and consolidation on Thursday (May 29) in Cortlandt, Assemblywoman Sandy Galef explained details, in brief, of New York State’s push for local governments to not only hold the line on property taxes but cut expenses. Galef chairs the Committee on Real Property Taxation in the Assembly, the lower chamber of the New York State Legislature. 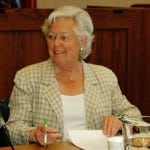 The state initiative, part of the recently-adopted state budget, involves both local adherence to the state-imposed cap on property-tax increases and rewards, in the form of rebates for taxpayers, for jurisdictions (including counties) that comply. However, the level of difficulty increases in the second year of the multi-year program.

Thus, Galef said, “if our school districts this year stayed within the cap that was apportioned to them, the State of New York will come in and pay the difference in our taxes from last year to any increases this year, if the school budgets passed,” as all those in her district did in May. “There will be a check coming to residents of our community later this fall to cover that portion of the property-tax-freeze program,” she said.

Similarly, she continued, in drafting 2015 budgets this fall, if local governments — such as towns, which adopt budgets in November — stay within their tax cap, “there will also be a return to the taxpayers of anything that is an increase in taxes, but within the tax cap.”

“So,” she summed up, “we have two different programs for the first year.”

Put another way, as Galef did in a written report in her latest constituent newsletter, “in Year 1,” if school districts and other jurisdictions alike, “stay within the cap, property-taxpayers would receive a check for a tax credit in the mail to bring their increase down to zero.”

However, “the second year is different,” Galef cautioned at the forum. “In the second year, both our school [districts] and our local municipalities have to keep within the tax cap and also prepare for a 1 percent cut in their spending — 1 percent over three years — in order to be able to have their taxpayers again receive some additional monies from the state.”

She noted that to make reductions and achieve savings, Albany recommends program coordination, government consolidation, or sharing of services by the state’s numerous and disparate local jurisdictions. [See separate article.] “There is a real effort to try to lower our costs. We live in very high-cost counties in a very high-cost state,” Galef said.