Pregnancy and gardening aren’t exactly compatible, I’ve discovered. Now into my eighth month, I find bending over and kneeling become less comfortable daily. That baby pushing on my diaphragm leaves me breathless from the simple act of tying my shoes, not to mention that weeding, sowing seeds, and transplanting all require much longer episodes of breathlessness.

This summer a few of the garden beds are going fallow. I accepted that fact before planting season began. Instead of leaving the beds empty, though, I wanted some easy solutions to improve the soil for next year. There are many choices, depending on the goal, for sowing plants that will add nutrients and mulch to the soil in the meantime; I don’t have to waste an entire season.

Farmers use cover crops for many reasons. Since vegetable growing takes nutrients out of the soil, rotating in a planting that contributes to soil health can be a smart, organic approach to preparing fields for the next season that can cut down or eliminate the need for chemical fertilizers. 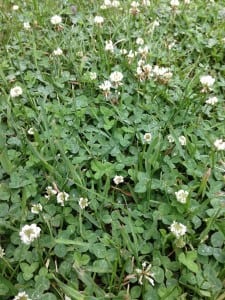 White clover, probably growing in your lawn, is in the same family as red clover, a cover crop. (Photo by P. Doan)

Many people think of the cover crop as the winter planting. When warm weather vegetables are out of season, it’s a way to manage erosion, run-off, and weeds that would come in the spring. Cover crops can be used at any time, though, as a way to do all those things, and will work nicely in my garden this summer when I have other things on my mind.

I consulted Cornell University’s website for information about cover crops. There is an entire section devoted to them with a breakdown both by season and by the name of the crop selection. For planting now in early June, I have two choices: buckwheat and sudangrass.

The beds I’m going to use them in have been planted with vegetables for three to four seasons. Although I add compost and shredded leaves every summer, the soil still gets depleted over time and this seemed like an opportunity to build up super soil for next summer. Buckwheat has an advantage to me because it has a faster growth period and can be mowed after about 50 days, while sudangrass takes up to 70 days. In roughly two months, which would be August, I could plant some fall crops like lettuce and beets after the buckwheat has run its course.

Buckwheat seemed like the better option for my purposes and will add calcium and phosphorus to the soil. Bees love the flowers, too, an added bonus to support their ecosystem in my yard. Buckwheat honey is sought after. It’s an undemanding plant, too. I’m not even going to add organic matter to the beds before I sow it. It will suppress weeds and then serve as a nice soil additive when it’s done. If I were ambitious, I’d try to harvest the buckwheat, but then again, I did mention that I’m eight months pregnant. This experiment seems like enough of an endeavor for this particular season.

If my buckwheat does well, I could try another cover crop in late summer or early fall, too. Two legumes are advised on Cornell’s website and both are excellent at adding nitrogen to the soil. Hairy vetch and red clover will also suppress weeds; stay put in the winter to prevent soil erosion, and tolerate somewhat variable growing conditions. Red clover can perform even in partly shady areas. It has purple flowers and can be found growing naturally on roadsides, in meadows and in lawns. Bees love this crop, too, and since it will flower into October, it’s a late season food source if you’re trying to support bees through all three seasons.

Hairy vetch has some properties that made it more complicated and less desirable for my purposes. It requires high levels of phosphorus and potassium and I’d have to test the soil to make sure it would grow well. It’s slow to get going and I’d either need to plant a second crop over it to ensure success or deal with the weeds that would pop up as the seeds establish. Bees will like it, too, but I prefer the clover flowers.

Sometimes there are reasons to let the garden rest and rejuvenate and other times, it’s good practice. Cover crops aren’t just for vegetable gardens, either. Seeding flowerbeds in the off season is a great way to revive the soil and get set up for the next warm weather bout. I recommend the Cornell site for anyone who wants to learn more, it was really useful and easy to access and compare the choices: covercrops.cals.cornell.edu.