This summer, Cold Spring’s Buster Levi Gallery will showcase the work of its collective membership, in two separate shows, one opening on July 4 and running through July 27, and the other running throughout August. Each of the seven artists participating in the July show has provided an image of their work and a short description of their work overall or a specific piece. Look for the second group of seven artists to do the same in a few weeks’ time. 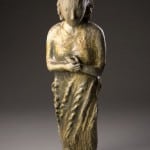 This clay sculptural figure is one of six that I completed during an artist residency at the Museum of Art and Design this past winter. The figure is high fired in a wood kiln, its surface decoration reminiscent of minerals or stones, a result of melted ash from the long firing process.

My figures stand in contemplative poses reminiscent of religious iconography. I exhibit them in small altar installations, as a votive, evocative of the women sculptures from ancient cultures. 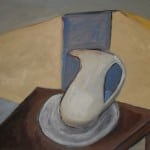 Untitled oil on board work by Tim D’Aquisto

I work with recognizable objects, mostly tables, chairs, and vases in a somewhat muted palette, achieving a sense of abstracted reality, perhaps the space of the imagination. The alteration of familiar shapes invokes instability and separation of time and perception.

These paintings have several subjects: the attempt to create two-dimensional space, movement and intrigue on a two-dimensional surface, along with the associations of the imagery, which include a floating bedstead (to toss and turn in as well as to dream); confounding assembly diagrams, and dubious Rube Goldberg-like construction methods. 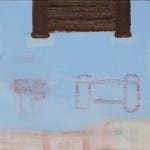 The imagery appears, then is sometimes obscured, floating in a sky / water space. Durable objects are built out of paint and then become paint again.

My academic focus was in the fiber ﬁeld. I loved the process of building fabric, noting time with each throw of the shuttle. My work eventually got too predictable (for me) and as I trusted my instincts, I moved away from the loom and took with me the vocabulary of the weaver. 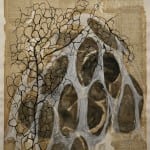 I am drawn to the challenges of collage, of disparate elements sitting in balance, creating a visual calm, an imbalanced harmony. Working with different materials and mediums I am able to create surfaces and textures expressing my interest in the symbiotic and antagonistic relationships in structures found in nature and our environments.

I work in collage. I hope through color to transmit an emotional inner life of the work, not just effects by manipulation of materials on the surface of the canvas. 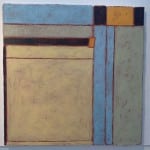 A collage by Martee Levi

I consider my self as a spiritual artist … a term that would embarrass most artists today. Malevich, Mondrian, Kandinsky and Matisse considered themselves to be spiritual artists. For me I have an internal necessity of spiritual aspiration to be inwardly alive. A freshness of being with a higher purpose than art that reflects the world in object form.

In this series of wall-mounted head-shaped sculptures, I’m attempting to model different ways of thinking or personal attitudes in three-dimensional structures. The prismatic structure of the piece Mind could be interpreted as the way an individual pieces together their self-image or ego as an assembled group of fragments. 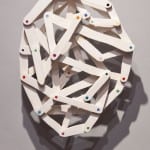 Mondrian’s Dream shows the way ideas and experiences connect and overlap to form an individual’s consciousness. Focus is structured as a more orderly calm frame of mind with an inner glow. The three sculptures are fabricated of wood and paint.

Visual banter is one way to describe my recent mixed media paintings. Lines, patterns, and shapes colliding, caressing, and ultimately falling into reluctant order. Compositions emerge out of a grid format, but quickly deviate from the grid through the introduction of unbalance and alterations of scale. 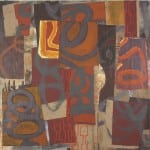 The surface of the paintings is built up using acrylic paints and collage papers gleaned from silkscreen prints, mono-type prints and paintings on paper. The work is, in essence, a hybrid of painting and collage. Each painting reaches a resolution after a bit of ‘jousting’ (otherwise known as ‘dialogue’) between the work and myself.