A little over 50 years ago, a transformation took place as a Teller Avenue factory in Beacon found its second life as a ballet studio. The studio has seen only four owners since its 1961 founding by Elizabeth Schneider Hanson. Schneider Hanson ran it until 1969, when it was bought by “Madame Seda” described as a “classic Russian ballet teacher — she had a cane and was very strict and is remembered very fondly —” by the studio’s current owner, Alex Bloomstein, who took over from the third owner, Valerie Feit, in 2006. Feit had run the studio since 1984.

Today the studio — once home solely to ballet instruction — offers, along with all levels of ballet, classes in modern, African and jazz dance, and is expanding its repertoire in the fall with classes in tap, hip hop and musical theater. These classes will be taught by teachers new to the studio but widely known in this area: Cold Spring’s Katie Bissinger and Nathalie Jonas. 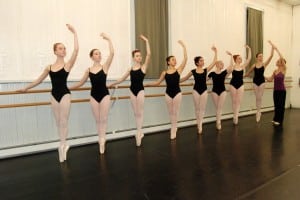 A teacher makes an adjustment on a student in a ballet class in the studio at Ballet Arts.

In addition, BAS is starting an ambitious new venture called Pre-Professional Day Program, designed for serious dancers considering careers in dance. They will take classes four days a week from 1 to 4 p.m. in ballet, pointe, partnering and modern, with stretching and core strengthening work each day of class. On Saturdays, BAS largely revolves around the homegrown Dutchess Dance Company, offering classes and choreography to a select group of older students who contribute repertoire to the entire studio’s recital each year in late spring.

During Feit’s tenure, the studio space expanded from one studio room to two; the second, smaller one located downstairs from a reclaimed area of the basement. When Bloomstein took over he changed the upstairs floor, formerly made of wood, to a fully sprung “marley” surface, designed specifically for dance, and added viewing windows. Both studio spaces are constantly in use during the school year calendar, from the afternoons through the evenings.

When Bloomstein bought the studio (impulsively, after learning that Feit, a friend, was selling it) — “I said ‘I’ll buy it’ immediately, then I freaked out. It was scary,” Bloomstein recalls. At that time he was a full-time practicing attorney, albeit a dissatisfied one. Traveling further back, Bloomstein began dancing as a teenager. In college, while focusing on academics, he “met a girl who told me she taught a dance class at UMass,” he relates. “I took it … I wound up dropping a lot of my academic classes and really started dancing. I then spent six summers at Jacob’s Pillow [the renowned Berkshires-based dance center] and did a lot of teaching, which I naturally gravitated towards.”

Though graduating as a double major in political science and economics with a minor in dance, Bloomstein stayed with dance until he was 30 and real life swooped in.

“I got married and my wife was pregnant and I felt like I had responsibilities and needed to rethink my life,” he said. “I quit dancing and went to Albany Law School, then got a corporate job. But I wasn’t happy and I quit and became a public interest lawyer instead.”

Bloomstein, acting as a “law guardian” for 15 years, largely represented children, dealing with “neglect, physical abuse, juvenile delinquency, a lot of family court … I did that until I bought the studio in 2006.”

Though a novice at running a dance studio, Bloomstein “knew a fair amount about the structure of teaching ballet. Schools are often classified as one of the three Cs: conservatory, combination and competition. The conservatories are geared toward producing serious, technical, professional dancers and have things like dress and behavior codes. It was obvious that this was a conservatory school: my world.”

Over the years, Bloomstein has combined the conservatory style with his own sense of how to implement it, perhaps influenced by his years representing children:

There’s an emphasis on inclusion here, a lack of competition. There are a lot of different ways to motivate people. Fear is not one of them. What we try and do is motivate them by including them and understanding them. There’s no blanket, across-the-board way to get the best out of them. We have a ‘let me help you’ attitude in the company. It’s not about tearing people down. But, it’s a fine line, a line we try to literally dance. Parents want their kids to know what discipline, commitment and hard work means … the way that classical training changes you physically can be applied to every part of life. They way dancers hold themselves, the sense of their own bodies — it’s so important.

The implementation of the new pre-professional program serves as a way of separating out those whose commitment to dance is at a different level. Not solely geared toward those who have made a 100 percent commitment to following a professional path, it is also designed as a tester for a year or two for those students who are just considering it. “It’s designed, yes, to turn out dancers who can then move on if they like, but it’s equally useful and valid for people who want to develop themselves and maybe want to do this in a non-mainstream, non-traditionally academic setting, turning into mature, sensitive, creative people,” Bloomstein says.

The program was created in response to several families approaching Bloomstein, as there is nothing similar in the region and currently students wishing that level of commitment have to audition for and enroll at boarding programs — a giant step for teenagers and their families. “I’m tired of having to say to parents ‘You need to send her away,’” Bloomstein notes.

As for the expansion into other dance forms and the addition of the new teachers, Bloomstein says he wants the BAS dancers to “have more than one frame of reference. It’s all geared to generating internal creativity. In addition to training technically proficient dancers, we’re developing individual artistry.”

Bissinger, who will be teaching musical theater dance, hip hop and tap, is well known to the Philipstown and Beacon dance community after having headed the dance programs at both Hudson Valley Dance Studio and Studio B.

She says she is “very excited to be moving to Ballet Arts Studio because it almost feels like a homecoming for me as I attended a similar conservatory type studio when I was growing up. I love that the emphasis is on ballet as the basis for all other forms of dance and really hope that all of my tap, musical theater and even hip-hop students gain a respect for ballet as a result of dancing at BAS. I think that all forms of dance teach kids self awareness, build confidence, musicality and athleticism and expand creativity.”

Jonas will be teaching two modern dance classes at BAS. “In terms of technique, I will be teaching a little bit of everything: Taylor, Cunningham, Limon, release,” she says. “The most important idea I strive to instill in my students is self-awareness. How are they moving an arm? What muscles or bones are involved to make that movement? What is the head doing as your arm lifts? How does this affect your legs, your torso, your breath? This constant work of asking questions provides students with a sense of curiosity and self-confidence, both of which, of course, are also vital outside of the dance studio. I am also a certified practitioner of the Feldenkrais Method, and I bring those proven theories and practices into my teaching as well. All that being said, I make sure my students have fun and get lots of exercise!”

Jonas choreographed and performed professionally in New York City for 15 years and was an adjunct professor of dance at Barnard College for 11 years, teaching modern.

Students interested in auditioning for or learning more about the pre-professional program or any classes should call 845-831-1870, or email: [email protected], or visit balletartsstudio.com. Free trial classes are always available.