Coming off a season of mostly traditional (and doubtless much appreciated) summer fare — two different productions of Fiddler on the Roof! — The Depot Theatre in Garrison plans to begin the autumn season with a bracing, contemporary, adult comedy/drama. A Ship to Cross the Sea of Suffering, by successful television writer and Cold Spring resident John Plummer, will feature some of the best known and accomplished actors in the area in a four-performance staged reading on two nights in September.

If you have enjoyed the likes of Jason O’Connell, Maia Guest, Greg Miller and Vaishnavi Sharma in past Depot, HVSF and World’s End Theater productions, then you might find their latest collaboration of particular interest. Each of them will be challenged by playing characters who are tough, smart, mean, profane, angry, selfish, loving, hating, duplicitous, obvious, vulnerable and yes, Plummer assures us, funny. 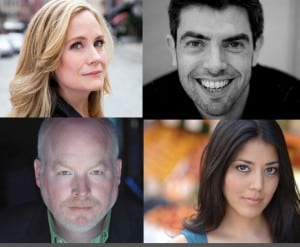 An experienced theater hand, Plummer is also directing the reading. While the combined schedules of the company didn’t allow for sufficient rehearsal time for mounting a complete show, “the cast is so phenomenal it will be better than a lot of full productions,” Plummer said.

The play, written in 2011, is a deep dive into the murky regions of terrorism, the meaning of art, the definition of an artist, the pain and solace of personal relationships, loyalty to country, friends and lovers as well as the complexity of language and how it helps and hurts our capacity to confront and make sense of all these and other matters.

And then, poetry lovers, there’s Walt Whitman, whose work becomes a sort of fifth character in the play. Did you know Osama bin Laden read Whitman? Apparently he didn’t care for the 19th-century Brooklyn boy’s sensuality and democratic spirit but perhaps his reasons were dishonest.

Osama bin Laden is not a character either but he is a presence in the play’s swirl of current-event-driven angst and redemption. The play spends time with FBI agents and their troubling, at times desperate interrogation techniques; a terror suspect who seems to relish the idea of suspect as performance artist; and a woman well known to the agents who loves not wisely but ultimately perhaps quite well.

In a telephone interview from Los Angeles, Plummer, 47, underscored that despite the play’s harsh language and dark themes, it was actually “an uplifting show about terrorism. It’s very funny, very hopeful,” he said. Plummer also acknowledged that the humor is to a degree hidden beneath layers of mystery, sex and violence, as well as literature and politics. It is also about “very intelligent people doing stupid things,” he said.

The play’s story date is 2007, six years after the fateful events of Sept. 11, 2001. Plummer, a former New York City resident present for the falling towers and all that followed, readily credits that time as the initial inspiration for the play. “It’s a response to that event and terrorism in general. It’s also about the human willfulness to divide up ourselves into you’re in that group and I’m in this group,” Plummer said. 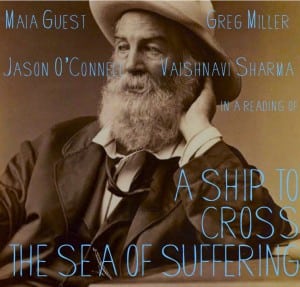 Also informing Plummer’s perspective is his religious faith in Buddhism. His particular practice is known as Nichiren Buddhism, which follows the teachings of the 13th-century monk Nichiren Daishonin through the worldwide lay organization Soka Gakkai International. Plummer sees in part that the origin of his play is in the Buddhist awareness that “we have all been in a world of suffering” (particularly since 9/11). He sees the job of the artist as bringing out that “we all have the capacity to transform suffering into joy.” The title of the play comes from Nichiren Daishonin’s writings.

That said, leave your preconceived notions of Buddhism and its practitioners at the theater entrance. Plummer’s script is not about proselytizing but rather an attempt at a dramatic embrace of humanity in all its muck and mire. “To be human is complicated. We have the capacity for violence and destruction and for love and creation,” he said.

Role of art, dangers of language and power of love

The characters in A Ship to Cross the Sea of Suffering come at each other with burning needs and desires for understanding and connection. They resort first to insistent questions with no tolerance for what they perceive as dishonesty or evasion. The male FBI agents frustrated by their hunt for terror suspects and the deviousness of the one they have in the chair find themselves stripped down to their impulses as language fails them as a mode of understanding. The two women in contrast use language to mask and deceive as well as uncover truths. 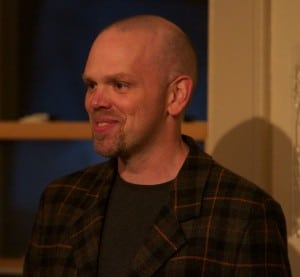 A professional writer for over 20 years, Plummer’s current preoccupation is with his admitted first love, television, which these days has an expanded broadcast universe. At the moment he is finishing writing all the episodes of season three of Granite Flats a program on BYUtv (Brigham Young University) available on satellite channels and at BYUtv.org that features among the actors his wife, the aforementioned Maia Guest, and their 15-year-old son Charlie. Christopher Lloyd, of Taxi and Back to the Future fame, was a guest actor last year and is returning this year.

A co-writer in season one, head writer in two, Plummer is now the sole writer as a result of both his success and the necessity for productions to be leaner in an expanding and very competitive Internet-driven universe. HBO’s True Detective and Fargo on FX are recent examples of the single-writer show, according to Plummer.

Set in 1962, Granite Flats is small town America wrestling with the threats of a Cold War world and the anxieties of relationships. In an interview with The Paper in April 2013 he said the show was about searching for truth, mystery, investigation.”

A Ship to Cross the Sea of Suffering will run for four performances, 5 p.m. and 7 p.m. on both Saturdays, Sept. 6 and Sept. 13. A premium wine and cheese event including meeting the writer and actors will be held at 7 p.m. on Sept. 6.