Charlie Plummer is that rare 13-year-old who was actually excited over spending more time with his parents. Charlie has an excuse for this unseemly teenage behavior: He’s a professional actor, and he and his parents, Maia Guest and John Plummer, are currently enjoying a rare moment of show-business trinity, as the three are all connected with the same project, a new eight-part television series, Granite Flats. Plummer is one of three cowriters, and Guest and Charlie act — though they don’t portray mother and son.

The Plummer-Guests, who live in Cold Spring as often as their now-itinerant lifestyle allows them to, didn’t plan this out, or even lobby for it; rather this change in their lives has been unscripted, fortuitous, welcome, but not without its challenges. 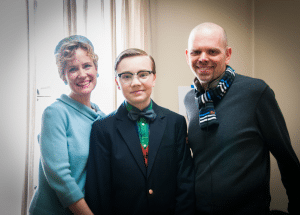 Plummer came on board the project first. A writer for television and a playwright, as well as co-founder of World’s End Theater here, he initially was brought in to consult on a draft of a pilot generated and developed by BYUtv (Brigham Young University Television). After rewriting most of the pilot and mapping out the second episode, he was hired to cowrite the eight-episode series, which BYUtv was developing as their first scripted drama. It’s a way of attracting more notice to the network, whose motto is “See the good in the world.” Plummer said that the mandate was to create something family-friendly but challenging.

After casting had begun last summer, there were difficulties finding an actor for the role of Timmy, an overeager science geek who befriends the new boy in Granite Flats, a small town built up around a Colorado military base. Plummer asked the producers if he should “put my kid on tape,” receiving a “sure” in reply.

The producers loved what they saw and sent it on to the casting director without noting the relationship between writer and actor. Casting approved, an offer was made to Charlie’s agent, and Charlie headed to location in Salt Lake City, Utah, doubling for Colorado, with his mom and little brother James in tow.

They filmed the pilot and three additional episodes during the fall. Guest’s “role” during this time, despite a lengthy acting resume, was solely that of on-set parent, a requirement. At a writers’ conference, one of the producers asked Plummer if Guest still acted, as he thought she might be good for a role in some of the episodes yet to come.

“They sent me an email asking for an audition on tape. I just didn’t want to embarrass myself because I had to go back on-set as a parent!” related Guest. Her acting chops passed muster when, after the first day’s shooting ended, the director of photography asked Guest whether they had worked together before, not connecting the actress with the on-set mom.

Hair and makeup helped with the transformation. Granite Flats is set in 1962, that Cold War-dominated period of transition from the homey values projected during the 1950s into the upheaval of the mid-to-late 1960s. There is an Outer-Limits-crossed-with-David-Lynch air of mysterious forces at work amidst a changing America. “It’s about searching for truth,” said Plummer, “mystery, investigation.”

The trajectory of the plot was not all mapped out at the start. “This is based on real life history. We know what our parameters are, historically, but within that we are following an organic story and not trying to control it. You set things in motion and see what happens. That’s the great thing about TV — it’s serial and you can make changes. The idea is as you watch the show, certain tropes are identified, but as the show unfolds, so do the characters, and you see much greater complexity.”

Although Granite Flats is produced by BYUtv, Plummer said emphatically that it’s “not a Mormon show. It’s written by a Buddhist, a Jew and a Catholic, to start, and it’s not about labels. We’re depicting people who have choices. There is plenty of bad behavior on the show. The network is open to the complexity and is not whitewashing it.”

If all this family employment sounds like a fairy tale, remember that such tales usually have some grueling underpinnings, and this is no exception. Charlie usually has to be at work by 6:30 a.m. and works 10 to 12 hours a day. Schoolwork takes up one to three hours of that day, and it’s hard to keep up. (Charlie attends the Professional Children’s School in New York City, but he’s only been there for a grand total of three weeks this school year.) Living in a two-bedroom hotel room for months on end has its perks but also its downsides.

Things are helped by a great family vibe on the set though, and an overall sense of adventure about the whole endeavor. If the series is picked up for a second season, the family, which is now back in Cold Spring, will pack up again in August, returning to Salt Lake for about four months.

Charlie said, “Most of the time I voice my opinion. Sometimes it can be difficult.” Plummer called Charlie “insightful, not just as an actor, but dramaturgically he can see what’s dishonest.” All in all, Charlie gives the experience a thumbs up. “I was excited about it, because I’ve never been able to work with my parents before. It’s been fun.”

The whole family is pleased to be back in Cold Spring, which Plummer said “is like Granite Flats in real life: a small town full of colorful people. We go deeper than the clichés of small-town life here — it’s almost like we’re in the fictional world we created.”

Guest has a more down-to-earth assessment: “It’s great to come back to more space … and Whistling Willie’s is different!”

It’s via the words of Charlie, though, that the family’s destiny may flow: “I’m getting used to not getting up so early. It’s kind of nice to be back in a small town — but I like traveling a lot.”

Granite Flats can be seen on BYUtv on Sunday nights at 8 p.m. BYUtv is channel 374 on DirecTV and channel 9403 on Dish Network. It is also streamed on BYUtv.org, where the previously aired episodes (beginning on April 7) can be found as well.