For Garrison resident David Gelber, the co-creator and an executive producer of Years of Living Dangerously, winning an Emmy Award for Outstanding Documentary Series had special significance even though he’s no stranger to the spotlight; this is the ninth time he’s won an Emmy. When the series debuted on Showtime this past April with a nine-episode run, it was the fulfillment of four years of work that he’d put into creating the series with his business partner, Joel Bach, after they both left jobs at 60 Minutes to pursue it. 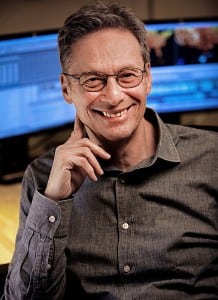 Years of Living Dangerously, or the YEARS Project, explores the impact of climate change on communities around the world, using celebrity correspondents to do the reporting. Harrison Ford, Don Cheadle, Olivia Munn, Matt Damon, and Jessica Alba, among others, were drawn by their commitment to the issue to be involved, and Hollywood heavyweight James Cameron was an executive producer. Gelber and Bach’s strategy for the series was for the celebrities to act as journalists and they interviewed people who are affected by environmental crises caused by global warming.

“I was amazed at what good ‘journalists’ our actor-correspondents turned out to be,” Gelber said. “They all performed with the skill and intelligence of 60 Minutes correspondents.”

The Primetime Creative Arts Emmy Awards, announced on Aug. 16, recognize technical accomplishments in television programs (the Primetime Emmy Awards will air on Monday, Aug. 25). Gelber’s series Years of Living Dangerously was nominated in two categories, for both Outstanding Writing for Nonfiction Programming, which Cosmos: A SpaceTime Odyssey won, and for Outstanding Documentary or Nonfiction Series, which Years won. Gelber said he expected the popular Cosmos series, which had 12 nominations and is hosted by astrophysicist Neil deGrasse Tyson, to win both categories; the competition was formidable.

When Years was announced as the winner, Gelber stepped in to give the acceptance speech on behalf of the team and said, “I talked about climate change being far and away the biggest issue of our time, which was a little out of sync with the festive mood.” Years of Living Dangerously was also named as “the EMA Outstanding Achievement for Environmental Content Award” in the 2014 Environmental Media Awards earlier this month.

Although the recognition for the YEARS Project is Gelber’s ninth Emmy award, it’s his first nomination and award in the primetime category. His previous eight Emmy honors were for news and documentary. For 25 years, Gelber was a producer on 60 Minutes and has been honored with every major journalism award throughout the course of his career.

Still, the Emmy for Years of Living Dangerously has special significance due to his personal connection with the subject matter.

“I think we’ve figured out a way to tell the climate story in a way that interests viewers, even if they don’t think much about global warming and what causes it,” Gelber said. “The response from critics couldn’t have been better.” In an interview with The Paper last April, Gelber talked about climate change as the issue he was going to devote the rest of his life working on. As a father, he felt it his mission to do this for his daughters.

The series has been so well received that Showtime is re-airing it again starting the second week of September and the entire series will be on DVD beginning Sept. 7. Gelber and his co-creator and partner on the series, Joel Bach, are hoping for a chance to run a second season in 2016.

For Gelber, the timing is critical because it would air during the next presidential race. Climate change wasn’t an issue in the 2012 presidential race and he would like to influence that in the next race. That a documentary series on global warming was recognized with television’s highest honor signals that the debate is shifting and Years is helping to tell the story.

The YEARS Project got so many requests for material from schools that they teamed up with the National Wildlife Federation to create curriculum based on the series for middle school, high school and college students that will be available this fall. Gelber said that he hasn’t been in contact with either the Garrison or Haldane School Districts yet about sharing curriculum, but he’d be happy to work with them.

The fight to address the biggest issue facing the planet has plenty of talent and leadership right here in the community. Two other Garrison residents were involved in the series. Radley Horton, a climate scientist at Columbia University, was involved in the series by vetting the scientific rigor of their scripts and Arturo Aranda was their social media guru. Behind the scenes, Gelber credits his wife, Kyoko, and daughters Maya and Clara, for their support of him and the project as it’s taken up a lot of his time and he couldn’t have done it without them.

The first episode of Years of Living Dangerously, “Dry Season,” is available online.