Alongside his civic and academic achievements, Matthew Vassar, founder of Vassar College, made his fortune brewing beer in Poughkeepsie. In fact, New York state was the national leader in hops production throughout the 1830s and ‘40s. Many farms in Dutchess County likely supplied ingredients to M. Vassar & Co., until a combination of blight, shifts in climate and Prohibition virtually wiped out local commerce for the next century. 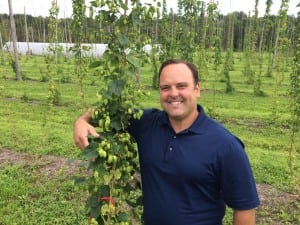 That’s about to change. An especially delicious model of supply and demand is taking shape in the region that would make Vassar proud. Driving past local farms, in the dog days of late summer, a very tall, distinctly aromatic varietal can be seen dotting the horizon: hop hills. The Farm Brewery License recently passed by Gov. Andrew Cuomo, which incentivizes the use of New York state produce by craft beer makers, has ushered in a new era of locally sourced suds.

Vintage photos from the old heyday of East Coast hops are displayed like trophies on the walls of Beacon’s high-profile craft beer emporium, The Hop.

“The Hudson Valley has some of the best growing conditions in the world. We are a Tuscany of our own,” said Justin Riccobono, a former Beacon city councilman and recreational commissioner. “When I first saw these pictures, I asked myself ‘why aren’t there more farms like that now?’”

Riccobono approached landscaper Carmine Istvan with a proposal to grow hops at the 10-acre farm Istvan had just purchased in Lagrangeville. Riccobono is now the director of Eastern View Farm & Nursery, where he manages the 4-acre Dutchess Hops yard. Last year was his first harvest, which produced about 300 pounds. He estimates a harvest of 1,000 pounds this month.

Dutchess Hops bills itself as “the first commercial hops farm in the Hudson Valley.” According to Cornell University’s Cooperative Extension, the last recorded hops yard in Dutchess County was in 1870.

“It’s difficult to track but there are roughly 60 growers in New York state with more than an acre of hops. Many have between 2 and 5 acres. There are about 60 more with less than an acre,” said Paul Leone, executive director of the New York State Brewers Association. “The growth of the hops industry is a direct result of not only the new Farm Brewery License, but also brewers’ desire to use local ingredients whenever they are available.” 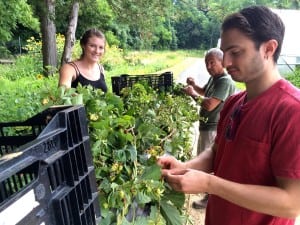 Riccobono is utilizing his research and experience at Dutchess Hops to organize the Hudson Valley Hops and Grains Cooperative (HVHG Co-op), a network of local farms working together to eventually form an independent clearinghouse for processing, packaging, storing and selling their ingredients — a one-stop shop for hops.

He has also set up a consulting firm, Hudson Valley Hops, to assist and incubate new yards and help raise funds to offset operational costs.

“We have the land, the agricultural expertise, people who want to make beer and who want to drink it. Harvesting and processing is the most costly piece of the puzzle. Equipment can range anywhere from $80,000 to $500,000,” Riccobono said.

“Most local hops growers are going to be dealing with whole hops, until they get the resources to pelletize, which is fairly involved and requires expensive equipment,” said Derek Dellinger, manager of Beacon Homebrew, located across the street from The Hop. “If they’re processed correctly, there shouldn’t be a huge difference in flavor between leaf hops and pellet hops, although this is still an ongoing debate for some.”

Obercreek Farm, a 40-acre property in Wappingers Falls, is participating in the nascent co-op. Owners Tim Heuer and Sam Wildfong recently harvested eight different varieties of hops for the first time from a yard that is roughly half of an acre. They have partnered with their neighbor, North River Hops & Brewing, on a new Imperial India Pale Ale (IPA) made with Obercreek’s wet Cascade hops.

According to the New York State Governor’s Office, 53 new farm breweries have opened up across the state since the new law took effect last January. Plan Bee, Evan and Emily Watson’s nano-brewery in Fishkill, is the only one in Dutchess County and is perhaps the only brewery in New York using 100 percent local ingredients. Plan Bee currently sells “Hops & Honey,” “Sour Apple,” “Mahican” and their other small-batch brews directly from their farm and at the Beacon Farmers Market.

“There are ongoing forums at the government level to adapt and change incentives for farm breweries like us,” Emily Watson said. “The license fee has been reduced, which makes it possible to even open a brewery. The capability to sell beer from different locations is also very helpful. These are provisions that don’t exist in the micro-brewery license.”

On Saturday, Sept. 13, more than 20 local breweries, distilleries and cideries will descend on Eastern View for Dutchess Hops’ Hudson Valley Hoptember Harvestfest, including North River (and their new IPA), Beacon’s brand-new Denning’s Point Distillery, and the Hudson Valley Cider Alliance, organized by Glynwood Farm’s Apple Exchange Program. The event celebrates these homegrown industries and their symbiotic relationship with local agriculture, touting “No Farms, No Beer” as its slogan.

“I get three to four calls per month from city planners or real estate companies actively looking for brewers to open a business in their town,” said Paul Leone. “A local brewery is not only a place where beer is made, but a place where people gather and socialize. We’ve seen that if a brewery opens downtown, other businesses quickly follow. It’s really a win-win for everyone.” 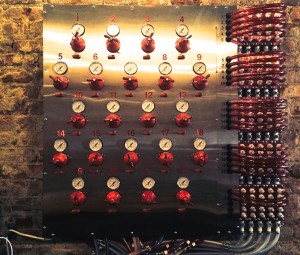 Two establishments in Beacon have grand opening plans for Second Saturday, the same weekend as Hoptember. 2 Way Brewing Company, named for the Hudson River’s dual watercourse, will be Beacon’s first modern brewery, located near the train station at 18 West Main St. Founder Michael O’Herron has produced seven craft beers, four of which are ready to serve in his tasting room.

Draught Industries, located across town at 394 Main St., promises an impressive menu of 20 beers on tap, one additional tap for sours, two wine taps and two beer engines. Owner Nick Forlano, a resident of Fishkill, said most of the beers he’s serving are New York locals and “the smaller the brewery, the better.”

Beacon resident John-Anthony Gargiulo is taking steps now to open Hudson Valley Brewery (HVB) in town. HVB is one of 25 projects recently endorsed by the Mid-Hudson Regional Economic Development Council. It now has priority status in the council’s fourth round of initiatives, coming up in October.

Chris Crocco, General Manager of Mill House Brewing Company in Poughkeepsie, confirmed their investors have a contract on 315 Main St., in Beacon, but said it’s not certain that the new business will focus on beer.

The Hop will be moving to their expanded location at 554 Main St., by late October, where co-owners Chris Kavanagh, John Kelly and Matt Hutchins might soon be able to add modern-day photographs of Hudson Valley hop yards to their walls.

Do Try This at Home

On Saturday night, Sept. 13, Beacon Homebrew will hold a “Tasting Beer” class at the store, where six different beers will be evaluated. No experience is required. They are holding an “Introduction to Basic Extract Homebrewing” class the next day on using a kit for extract brewing. 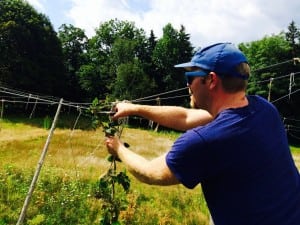 Tim Heuer at Obercreek Farm, cutting down a hop hill.

“There are certainly hundreds of homebrewers in the area and we’re getting many folks in the shop who are just starting out,” said Dellinger, who has been brewing beer for four years and writes a blog called Bear Flavored Ales. “It’s very exciting to have local hops to brew with. Homebrewers and professionals alike will be thrilled to figure out how to develop some beers around them.”

One thought on “Hops Take Root in Dutchess County”