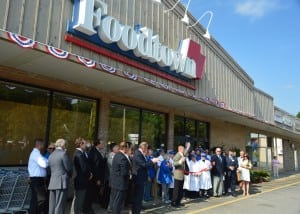 Foodtown’s owners, management, staff and customers celebrated the official grand opening of the newly expanded supermarket on Friday (Sept. 5). The expansion, which began in early June, saw the grocery store take over the former Cold Spring Post Office, increasing its floor space from 6,500 to 8,500 square feet. On hand for the ceremony were Sydney Katz, Chairman of the Board of P.S.K. Supermarkets — Foodtown’s parent company — along with his sons and co-presidents Noah and Daniel Katz and several senior managers.

The entire Foodtown staff, with the exception of a lone cashier who volunteered to tend to customers inside, gathered outside the store on a very warm morning to applaud Foodtown Manager Paul Satkowski as he cut the ribbon to officially mark the re-opening.

The Katz family owns 11 Foodtown supermarkets, which are also part of a cooperative that includes nearly 100 stores. After Friday’s ribbon cutting, customers enjoyed free food and beverages in the air-conditioned comfort of the store. 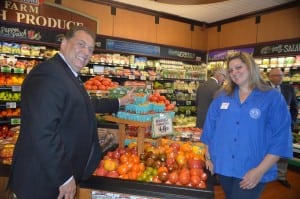