Fire completely destroyed a home at 720 Route 301 in the early morning hours of Sunday (Sept. 7). Jessica Winberry, an employee at nearby Glynwood and the lone occupant of the house, escaped with minor burns. 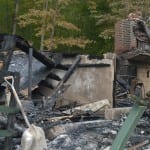 Rubble is all that remains after fire destroyed a house at 720 Route 301 in the early hours of Sunday morning (Sept. 7).

Joe Hyatt, Chief of the North Highands Fire Department, told The Paper that initially, the Putnam County dispatcher mistakenly alerted the Cold Spring Fire Company at 3:41 a.m., even though the house is located in the North Highlands Fire District. That was quickly corrected and Hyatt said he arrived at the scene some five minutes later.

What greeted him was a scene of devastation. “When I arrived the walls were completely blown out” by the explosion of one of two propane tanks located next to the house, Hyatt said. One of the walls collapsed onto a car parked close to the building. “The flames (from the leaking tank) were shooting 30 to 40 feet in the air.” When the second tank exploded moments later, Hyatt described the flames as “unbelievable.”

Hyatt said that the Putnam County Fire Investigation Unit listed the cause of the fire as “undetermined” because the destruction was so complete. He did say that a likely theory is that propane had leaked into the house and was somehow ignited. “Propane is heavier than air and so it accumulates in the lower levels,” he explained, a fact that he said is consistent with the walls having exploded outward.

In contrast he said that natural gas is lighter than air and drifts to the upper levels — typically resulting in the roof being blown off in an explosion rather than the walls. Another factor may have been a nearby power line that was knocked down during a storm the night before. Hyatt said that a possible scenario is that when the power was restored to the line it caused a spark that ignited the leaked propane. 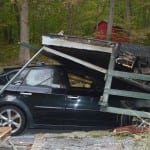 Part of the house collapsed onto the resident’s car.

A neighbor who spoke to firefighters at the scene said that Winberry had been asleep on the second floor and that when the explosion occurred the floor collapsed under her, forcing her to make her escape through a first floor window.

Firefighters remained on the scene until about 8 a.m.

This was the second major house fire in Philipstown in as many months. A home on High Street in Cold Spring was also destroyed in early July.