Staving off the onset of math anxiety, especially in the age of the core curriculum — which seems to bring out as much anxiety in parents as in children — is important in this day and age when fluency in math has become such a necessity in many professional lives. With this in mind, Butterfield Library, among others, is striving, according to program director Maureen McGrath, to bring “STEAM” (Science, Technology, Engineering, Arts, Math) programming to the fore.

Coming across a description of the “Crazy 8s Math Club” created by a nonprofit, Bedtime Math, and offered to Butterfield by that organization free of charge, they jumped aboard and are eager to begin. As of this writing there were just a few slots left in the initial offering of two eight-week sessions beginning on Tuesday, Sept. 16, for third to fifth graders and on Wednesday, Sept. 17, for kindergartners through second graders. All sessions begin at 3:30 p.m. and pre-registration is required. They conclude during the first week of November, and, if successful will be continued, with fresh material, in the spring.

It all began at home — the home of Bedtime Math founder, Laura Overdeck, mother of three young children, and a Princeton astrophysics, Wharton MBA public policy grad. “I think there’s a real hunger for fun math,” Overdeck says. “We have this idea that math isn’t fun, isn’t playful. There’s no real math for recreation. We all read to our children, but we don’t think of doing the same with math.” 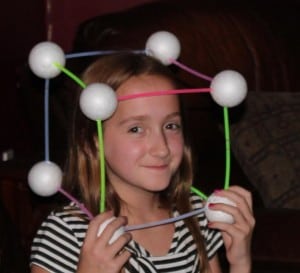 A few years ago, Overdeck began creating fun “problems of the day” activities for her children, and then, at the urging of friends with children, shared them via email and then began compiling them in a blog.

The blog soon turned into a book, under the bedtime math mantle, then more books and then libraries, which stocked the books, began asking if there were activities to go along with them. Overdeck, thinking about the activities most elementary school-aged children were involved in came up with sports, Scouting, dance, etc., but never ‘math clubs’ revolving around playful, accessible math activities that managed to communicate concepts through play.

Hence Crazy 8s was born, funded, along with other activities, through Bedtime Math, a nonprofit operating foundation, funded by charitable donations made by private donors and the proceeds from two Bedtime Math books. The foundation’s resources are used to advance the mission of helping kids learn to love math. As a private operating foundation, Bedtime Math funds its own charitable activities, such as publishing the daily math problem and the parents’ blog, and producing programs like Crazy 8s.

Overdeck sees libraries and other centers for after-school activities as ideal forums for math clubs. “With the ‘problem of the day’ so much was contingent upon the parents being early adopters. What’s great about the Crazy 8 program is that schools and other facilities across the country at every economic level are picking it up.”

As for content, Crazy 8s is described as “an after-school club that is a fun collection of novel, high-octane math activities that will appeal to a wide range of kids, not just the math whiz types. While Crazy 8s Math Club is meant to be a recreational activity, the activities do align with the Common Core standards. The club will meet weekly and members will build things, run, jump, and make a mess! Each session will have a different activity and participants will be given ideas to explore at home. Themes include: Exploding Bouncy Dice; Glow in the Dark Geometry; and Toilet Paper Olympics.”

The ”Time Of Life” — a Bedtime Math activity.

At the time of its introduction, piloted just last winter, the goal, according to Overdeck, was to get 300 to 400 clubs going, all with materials and instructions provided to libraries, over the summer. With an “if we really succeed maybe we’ll hit 500” hope, they now, wholly unexpectedly, find themselves with over 1,000. As they work toward fulfilling all of this initial group’s needs, they are also working on developing new material for spring, and considering the many requests for a middle school math club version, but are too inundated right now because of the success of this first iteration.

Overdeck (along with what is now a staff of seven, including staff “writer” Derek Stump) comes up with ideas from multiple sources, identifying relevant topics in the news and adapting activities to match, looking online for activities that they then translate into math ideas. They also get submissions from fans and Overdeck’s own family still pipes in with a few of their own. The key is keeping it fun and intriguing for every age group. “When you learn the math behind exotic vehicles, buildings being built, things like that, it is interesting.”

McGrath has been extremely pleased with the program, even prior to bringing kids into the mix. She and fellow Butterfield staff member Johanna Reinhardt will be facilitating the groups and she calls the lesson plans “really thorough, well-organized; they’ve given me the confidence to do the program — I can’t wait.”