The digital version of last December’s Philipstown performances of Handel’s Messiah is proving to be a bit of Christmas in July. The recording, titled A Philipstown Messiah, which contains passages from both performances recorded Dec. 22, 2013, was released online through Amazon, iTunes and CD Baby at the end of this past July and has enjoyed strong sales. 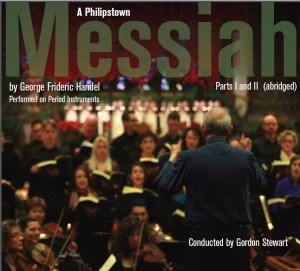 Its current ranking of 57,820 in the “Paid Albums” — basically digital downloads — category may not rival the No. 1 seller, Guardians of the Galaxy: Awesome Mix Vol. 1, but nevertheless is a strong showing for a classical “holiday” recording, and indicates that highly positive, standing-ovation response the concerts generated when performed at Cold Spring’s St. Mary’s-in-the-Highlands Church for two sold-out performances at the end of last year is translating into a wish to hear those concerts again.

Conducted by Gordon Stewart, many of the 21 musicians — now dubbed the Philipstown Philharmonia for recording purposes — performed on replicas of 18th-century period instruments. At the time, Stewart described the effect of this as “giving the music a plangent, softer sound, a fractional tone lower than we are used to.”

These musicians were joined by soloist singers Steven Brennfleck, Dashon Burton, Gabriela Mikova and Nicholas Tamagna, all who may be heard on this recording. A chorus, nearly two-dozen strong, comprised of both New York City choristers and local singers, completed the roster. Much of the orchestra was recruited by the Philharmonia’s concertmaster and first violinist Rachel Evans, a Garrison resident.

At 1 hour, 18 minutes in length, A Philipstown Messiah highlights, as did the concerts, Stewart’s conceptualized mounting of a carefully abridged production designed to be appreciated by all citizens regardless of their personal beliefs and musical backgrounds.

Twelve “reviewers” as of this writing, some of them identifiably Philipstown residents, had each given this recording five stars, one noting “the tempos lively and heartfelt, and the Hallelujah Chorus unusually rhetorical …” while another deemed the recording “… absolutely one of the finest, clearest, up-tempo presentations I’ve heard in a lifetime of singing and loving this wonderful oratorio. You will be amazed at the perfection, lightness and accuracy of the faster choruses like He Will [Shall] Purify and His Yoke is Easy.”