The Philipstown Soccer Club began in 2006 with one boys’ team, the Dragons, and one girls’, the Knights. This season, which began Sept. 7, the club hosts 10 teams: five girls’ and five boys’, U9 to U16, with about 120 players and 25 parents in roles of coaches, managers and board members. Teams are fielded in the spring and fall and indoors during the winter. The club plays in East Hudson Youth Soccer League. 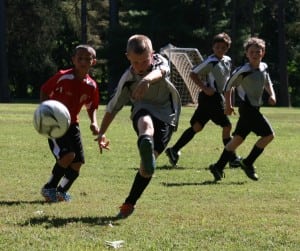 Evan Maasik controls the ball for Philipstown Soccer Club Arsenals, with Matteo Cervone and Patrick DiNardo, as they take on the Wappingers Wolverines on Sept. 7, at Philipstown Park.

PSC offers a bridge between recreation department and high school teams. Philipstown Recreation Department offers soccer in both spring and fall for first through sixth graders for Saturday games and also Wednesday after-school clinics for kindergarten through sixth grade.

PSC teams practice two times per week and play their games on Sundays at Philipstown Park; the U12 and older teams play at Haldane’s Brigati Field. St Basil’s field is also used. As the membership in the club grows, available field space is a challenge.

PSC is committed to teaching the love of the game in a non-competitive, fun and safe manner. PSC president Craig Roffman emphasized the importance of teamwork in soccer: “An individual cannot progress without other teammates.”

Teams are coached by volunteer parents who have played at the high school or college level. The club hires professional trainers who have, at minimum, college play experience to work weekly with each team. Roffman has seen the improved quality of play in the Haldane JV and varsity teams as a result of the extensive opportunities offered during three seasons of play in addition to clinics, tournaments and summer camps.

Roffman is enthusiastic about the club’s growth as well as the future of soccer in Philipstown. Three new girls’ teams were fielded last spring. PSC welcomes new interest and encourages parents who want to form teams to contact the club. Another opportunity that exists in club soccer for athletes who do not have a team in their age range is the option to “play up” a year or two.

This Sunday, Sept. 21, beginning at noon, you can spend your afternoon on the soccer fields at Philipstown Park watching three games back to back. For more information visit philipstownsoccer.org.