Beacon’s Peter Ullian has a signature line on his emails describing him in any number of terms including but not limited to librettist, library trustee, puppeteer, security guard, visiting assistant professor, and — perhaps most crucially: author, playwright, educator. 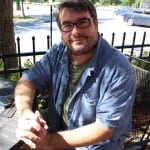 At the heart of it all Ullian is a playwright, a prolific one at that despite multiple identities. On Saturday, Sept. 27, the Beacon Theatre presents a reading, as part of their Scribe & Script Series, of one of his past and present plays, Big Bossman. Past, as it was the second full play he wrote, decades ago, but present as he recently revised it.

Ullian’s plays have tackled subject matter almost as disparate as his varied occupations, from life in a concentration camp (the musical drama Signs of Life) to the West Virginia Mining Wars of 1920 (Bloody Mingo Murder Ballad) and a character study set against a coup attempt on Venezuela’s Hugo Chavez (New American Century). Not to leave out the musical tale of a severely dyslexic man who longs to fly (Flight of the Lawnchair Man).

Big Bossman, on the other hand, is perhaps less exotic, being, in Ullian’s description, “about a family.” However, this is not a simple kitchen sink drama. Originally written in the 1980s, Ullian, in his re-write, set it in 2009, at the height of the recent recession, which Ullian finds “still very potent.” In its first incarnation it was described by Marianne Evett, in The Cleveland Plain Dealer as “a cross between Mamet and the Marx Brothers … Ullian’s comedy flirts with all kinds of allegorical possibilities … a suitably flaky style, an oddball naturalism that plays against the absurdities in the dialogue … bland spoofery, improbable dialogue laced with specific detail and monologues like verbal jazz riffs … Ullian has a distinctive voice.” 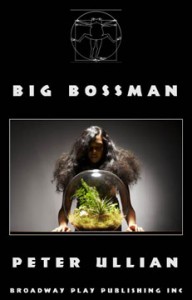 Ullian says this comedy drama intentionally “veers and lurches from ridiculousness to savagery.” The impetus for what transpires is a family suffering from hard times.

As Ullian describes it, “The family has never been well off and they have pinned all hopes on the jobs its two brothers have just taken on — with a local crime boss. There’s a drunken father, who never emerges from his room and a daughter who has basically raised her two brothers, the younger of whom is uncomfortable with some of the activities (trading in prostitution and trafficking) that their new job entails. His intervention, bringing a young woman home to the family apartment, precipitates a series of events — “some hilarious, some unpleasant” —according to Ullian. “It’s my most all-out comedy,” he says, but it veers, even in moments, because to me that’s the life we live.”

Ullian, like many a playwright, started as an actor. Dissuaded by his parents from studying acting at a conservatory, he instead headed to Oberlin College, which offered a liberal arts program with a small theater department with ample “opportunities to do your own things,” Ullian recalls. “I wound up writing material in order to give myself and my friends good parts,” he said. “There was basically no tech — we more or less turned on the lights and we were on stage. It didn’t take me long to realize that I had enough pride in my playwriting to know I should have a better actor than me reading my words!”

Ullian’s first play, The Triumphant Return of Blackbird Flint, wound up being presented at the Cleveland Public Theater, which he calls “independent and edgy.” First done as a reading, it led to a full production and “it launched me.” Set in the late ‘80s, with its remnants of the violent “new left” — the MOVE house, the armored truck robbery at Nanuet — all of which fascinated Ullian, the play chronicled a coalescing of “youngish radicals, former Yippies and young punks trying to create a new vanguard.” (“They failed,” Ullian notes.)

Continuing on to the University of Iowa Playwrights’ Workshop, from which he received an MFA, Ullian considered, post graduation, the lure of both Los Angeles and New York City, choosing a “less lucrative route” heading east, spending five years living in New York, writing. He calls himself lucky to have had a lot of productions of his works. Indeed, his work has been produced across the country in theaters including the Denver Theatre Center, the Prince Music Theater in Philadelphia, the Ahmanson Theater in Los Angeles, and at the Goodspeed, in Connecticut as well as at notable New York venues like Symphony Space and HOME and staged by such notable directors as Harold Prince, David Esbjornson, and Lynne Taylor-Corbett. Ullian has received awards for his dramatic writing from the Kennedy Center Fund for New American Plays and the Gilman & Gonzalez-Falla Musical Theater Foundation.

Thirteen years ago Ullian, along with his wife and son (they have since had a second boy) relocated to Beacon, coming upon it by accident after looking at Highland and Marlboro. Arriving during a stretch of the downturn period in Beacon, Ullian even then saw promise: “I paid a lot of attention when the recession hit again, but thought that all progress eventually backtracks and I noticed that there were closed-up stores, but then there were other successes and it’s always one step back, two steps forward.” Ullian feels that he is a good example of the Beacon community. “I’m not a Brooklyn hipster, but I’m definitely involved in the arts and entrenched in the community. I was on the library board and was president of the Beacon Hebrew Association — I’m committed to the place.”

In addition to writing, Ullian teaches, guiding college students in both “straight” playwriting and musical theater (book) writing. He finds the latter easier to teach because there’s more structure involved. “There are no rules, but there are tools,” he explains, “as songs generally have a purpose — introducing characters, taking a character to a moment of decision, and so on. It’s formulaic, but — so is a sonnet, meaning it doesn’t have to be cookie cutter. You have to have passion, inspiration and talent. Playwriting is more intuitive and I do more reacting to what students write than actual instruction. There is exposition, but every time you write a new play you are mapping new jungles.”

Calling himself inspired by the work of Tom Stoppard, Horton Foote and “early Beckett,” finding the voice of the characters is key for Ullian. “I hear the voices in my head,” he says. At its essence it’s about hearing character through the way people talk.”

Actors appearing in Big Bossman are Gary Dodge; Ryan Kleese; Angela Kustas; Patrick Manning; James O’Blaney; Alex Taylor and Alexandra Vittorini; Christine Vittorini is directing the reading, suitable for those of high school age and beyond. The Scribe & Script Series includes two other readings, Childish, by Leon Kaye on Friday Sept. 26, at 8 p.m. and Reach For The Sky, by Joseph Cosentino on Sunday, Sept. 28, at 3 p.m. Tickets cost $10 for each reading.