The last thing Joe and Bridget Immorlica want is for customers to feel intimidated. “Do the right thing, and business will come your way.” That’s more or less Joe’s motto, which has served them well in their business, Joseph’s Fine Jewelry, in Cold Spring.

The establishment, going strong in its 11th year, is located near the top of the hill on Main Street (the last commercial shop on Main, just down from St. Mary’s.)

The full-line jewelry store buys and sells all sorts, estate pieces to modern, and re-sells rather than scraps. Diamond specialists, they also handle high-end watches, coins and paper money, antique silver and more, along with settling estates, with engagement rings and estate jewelry being their most popular items. 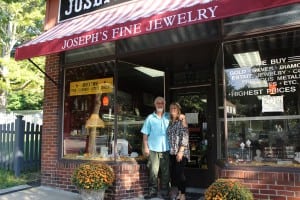 The Immorlicas know that many people become intimidated when it comes to selling or buying jewelry, coins and other items where they may not have certainty of value. Joseph’s is emphatically not a place where any customer, regardless of what they present, will be looked down upon or made to feel insecure. Joe aims for the opposite to happen: “I want you to know what you have before you sell it to me,” he says. “I am not a pushy salesman, neither of us are — I like an educated customer.” In fact, the Immorlicas frequently encourage those who are unsure about a transaction to get other opinions.

“If they’re hesitant at all, Joe tells them to go somewhere else to have it checked out there, too,” Bridget said. “Nine out of 10 times people shop around and then they come back. I think I’m one of the highest payers in the Hudson Valley,” Joe added.

Both Joe and Bridget have long roots in Philipstown. There was discussion between them over what qualified in the fourth-generation count, but both are close to it (Bridget is a ‘Lahey’). The high school sweethearts — together since Bridget was 15 — live in Newburgh and maintain extensive ties and roots to this community. It was in Newburgh that Joe’s career began.

According to Bridget, “A friend of his had a store in Newburgh and gave Joe a gold chain to sell. Joe sold it instantly, and then more. Then Joe fell in love with diamonds. He met a diamond guy from the jewelry district in New York City who taught him everything. (He still works almost exclusively with one jeweler on 47th Street, and is frequently courted by others.) Joe started buying his own, in New York City and then selling independently.”

Beginning out of their home — “our first ‘store’ was our dining room table,” says Bridget, things progressed, over time. Factoring in the years where he sold to stores, Joe says he’s been in the business about 30 years, over 20 years “officially.”

Their clientele is local and regional, with tourists thrown into the mix. Most come through word of mouth, something they prize. Joe shared an anecdote about being in an antique store a while back, picking something up to look at it, then being told by the owner, who didn’t know him, that he “ought to go to Joseph’s” if he was interested in those kinds of things. “We’re a destination store,” Joe notes, “though we do get some walk-ins, too.”

Open just four days a week, Thursday through Sunday, business is steady. “Though there are slow periods from time to time, it “can also get crazy,” says Bridget. “Sometimes it can get eight- or 10-people-deep in here.”

Some people, fueled by the Internet, consider themselves savvy, but often come in misunderstanding what they’ve read about valuation. “They’ll come in with a coin, having seen that it sells for, say $1,000 online, but they don’t understand that it has to be in a certain condition. With gold, they might come in knowing the price of gold that day, but what they’re bringing in is not entirely pure gold,” Joe explains.

The Immorlicas feel that ties to the community and their honesty are what keep their business strong. “People come in here and trust me, 100 percent. We’re here to serve people. Today I had a man come in and he left his whole coin collection here; religious organizations sell to me and they don’t go anywhere else; people come from an hour and a half, two hours away because we’ve been recommended,” Joe says. With estate settling, they will go over large amounts of items, piece by piece, in person or online, all in front of the person who has brought it in, explaining the value, or lack of.

“So many people bring in a pile, thinking it’s all costume jewelry, and inevitably there’s something in it,” he explains.

In addition to buying and selling, Joseph’s can also make any piece desired. “You want earrings reproduced? I can do it. You want new silver bands on a sentimental Army bracelet that doesn’t have value in and of itself but it means a lot to you? I can do it,” Joe states. With engagement rings, current trends bring in many young girls who favor an “estate setting” for the stones. “Right now halo, white gold, platinum and vintage settings are what’s selling well,” according to Bridget.

Above all, the Immorlicas “want to make you feel like you’re our friend,” Joe says. “I still like to make my customers happy. I’ve had calls on Christmas Day … we’ve had two engagements take place right here in the store … I drove to Peekskill at no notice once so that a husband could give his wife a Rolex the day their baby was born.”